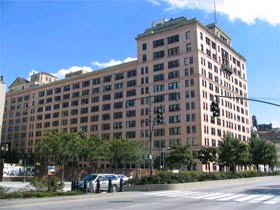 Last night, a 12-year-old girl fell 15 stories (according the Post--the Daily News says it was 14 stories) down a chimney at the Westbeth Building on Bethune Street. Apparently the girl, who was on the roof alone (it's unclear what she was doing up there), managed to climb up to a two-story chimney and fell inside.

The Post reports the father yelled at the building's security, "My daughter fell down the shaft!" and the FDNY found her in the basement boiler room, "covered in soot." She had broken both legs and suffered head trauma.

A resident told the News, "The roof is never locked. Everyone can go up and do whatever they want to." The building, originally the Bell Labs Building, was converted to housing in 1969 for artists.

Photograph of the Westbeth building from Forgotten NY

#Bethune Street
#chimney shaft
#fall
#greenwich village
#west village
#Westbeth
Do you know the scoop? Comment below or Send us a Tip
A new Gothamist is coming! We’ve moved comments over to our beta site. Click here to join the conversation and get a preview of our new website.