According to the latest Rasmussen survey, world's richest historian Newt Gingrich has opened up a massive 21 percent lead over Mitt Romney. Even with Ron Paul's new anti-Newt video (the political equivalent of the angry "shaking fist" emoticon) sweeping the airwaves, Gingrich now has the largest lead of any Republican candidate during this endlessly entertaining 2012 GOP musical chair primary. And the person who seems to be hurting the most currently? Former frontrunner Herman Cain. And it doesn't seem like all the free pizza in the world would be able to resuscitate his campaign at this point.

Facing an upswing in rumors about him bowing out of the race, Cain reiterated to reporters that nothing is over—and anyway, it's really up to his wife. "Since I've been campaigning all week, I haven't had an opportunity to sit down with her and walk through this with my wife and my family. I will do that when I get back home on Friday" Cain said at his New Hampshire campaign quarters, referring to his wife of 43-years, Gloria. "I am not going to make a decision until after we talk face to face."

In particular, Cain hasn't seen his wife since before Ginger White accused him of carrying on a 13-year long consensual affair with her. Democratic political strategist Peter Fenn told the Daily News he doesn't think Cain will last to Iowa after that bombshell: "This is 13 years. My guess is [Cain's wife] doesn't know much about this one. She's going to say to him 'okay Herman that's it. I'm not going to deal this any longer. We've got to figure this out between us. Get the hell out." The Daily Show thinks Cain voters will go to Gingrich—a man who has had two affairs—because they think Cain was too monogamous:

Cain did promise that, “a week from now, I will have made a final decision.” Until then, he has plenty of time to continue developing his "vision for foreign policy and national security." And to that end, Cain uploaded a new bizarre world map on his website, in which he labels major world countries with pithy summaries of the U.S. relationship with them. But why is Canada our "friend and ally" while Mexico is our "friend and partner?" Isn't Mexico our "friend in need?" And when will Brazil be upgraded from "friend" to "friend with benefits?" 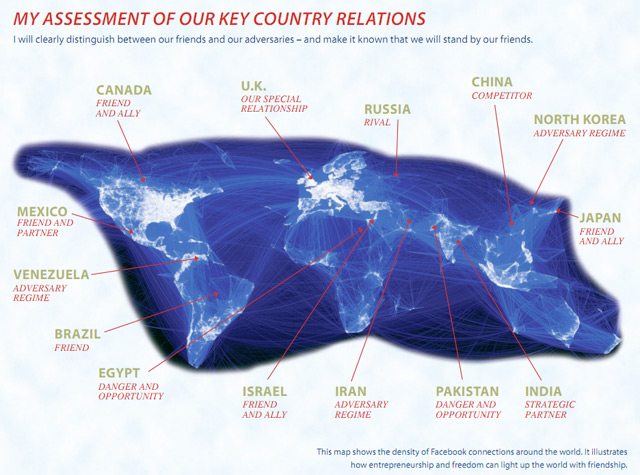 It seems those poll numbers have already gone to Gingrich's head: he told ABC declaratively, “I’m going to be the nominee,” in an interview today. “It’s very hard not to look at the recent polls and think that the odds are very high I’m going to be the nominee,” Gingrich, who'll be in Staten Island this weekend, added. But has Newt Gingrich single-handedly revived MC Hammer's career?