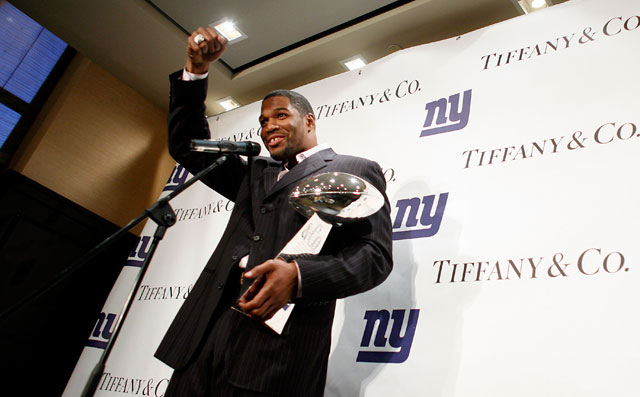 At least he has his ten-table ring: photo of Michael Strahan showing off his Super Bowl ring and the Lombardi Trophy by AP/Jason DeCrow

Saving his team plenty of uncertainty and resulting annoyance, Michael Strahan reportedly announced his retirement Monday. That means the team and the media are saved another dance in which the player hems and haws as he tries to avoid training camp while still collecting a high salary. Now, the Giants will move on with their talented and deep defensive line, anchored by Osi Umenyiora, and will avoid a major distraction when the team reports in July.

Strahan will be missed, but the Giants' attention to their defensive front four will make his absence less keen. Umenyiora and Justin Tuck make for a solid set of bookends. Strahan's career will be remembered for his pass-rushing prowess. The future Hall of Famer holds the franchise record for career sacks (Lawrence Taylor began his career before sacks were officially charted) and the NFL single-season record for sacks. Of course, the single season record is a little blemished because Green Bay quarterback Brett Favre handed it to him by going down on purpose. All in all, though, Strahan put enough quarterbacks on the ground on his own.

#football
#giants
#justin tuck
#michael strahan
#Osi Umenyiora
#retirement
#sports
Do you know the scoop? Comment below or Send us a Tip