Giants Run To The Playoffs 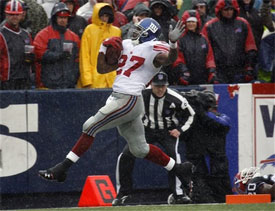 Start at the beginning, the Giants came out for their biggest game of the year completely flat. Buffalo jumped all over them and it was 14-0 Bills with less than ten minutes gone in the first quarter. Then consider the fact that despite the horrible conditions and Eli’s performance last weekend in the wind, the coaches kept trying to pass the ball.

But, at some point a light when on and the Giants did the only thing you should do in this type of weather, they tried pounding the ball. Brandon Jacobs and Ahmad Bradshaw both ended up with over 100 yards on the ground and the Giants’ defense came up with several big turnovers and a 21-17 deficit in the fourth quarter turned into an easy 38-21 win.

And so a Sunday afternoon that started so poorly ended with a playoff spot. Throw in a Vikings loss last night and the Giants now know they are heading to Tampa to open the playoffs. That makes next week’s game against New England meaningless for the Giants and gives the coaches two weeks to come up with a game plan for what is now the biggest game of the year. Let’s hope they use the time wisely.

#Ahmad Bradshaw
#brandon jacobs
#Eli Manning
#football
#giants
#new england
#sports
#The Giants
Do you know the scoop? Comment below or Send us a Tip