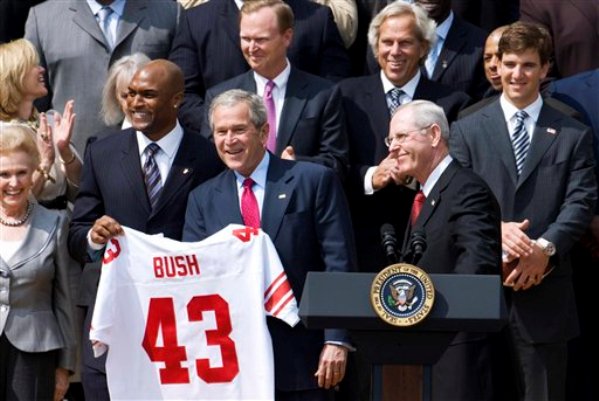 Before being feted at the White House, the New York Giants visited the Walter Reed Army Medical Center and met soldiers wounded in Iraq. Coach Tom Coughlin said to one 31-year-old U.S. Marine whose lost both his legs in Falluja, "You are the real heroes."

One soldier, Michael Cain, who lost his right leg five years ago and is a big Green Bay fan, was appreciative of the Giants' visit, "This means the world to me...They could be doing anything today, but they took the time to come here and thank the troops.” Giants tackle Kareem McKenzie felt it was hard to see such grave injuries:

To see the circumstances under which they’ve been injured and to realize that some of the people here that are hurt are younger than me or the same age, it’s difficult. We have a privileged life to a certain extent to be able to enjoy the freedoms and liberties that we have here. To have people make the choice to join the armed forces and to go overseas and fight speaks to their character and their loyalty. It’s amazing.

And at the White House, the Giants presented President Bush with a jersey (#43, of course). Bush praised the Giants' underdog Super Bowl win over the Patriots and also joked that perhaps a certain blond starlet distracted the Dallas Cowboys' Tony Romo, "We're going to send Jessica Simpson to the Democratic National Convention."