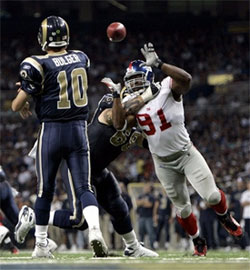 In his first full season of starting for the Cincinnati Bengals, Carson Palmer had a QB rating of 101.1. Over the last two seasons, Palmer threw for over 4,000 yards. Sunday, Palmer will bring his 37.1 rating and the worst passing offense in the league into the Meadowlands to face the Giants. Is this some sort of statistical anomaly? Perhaps, but don’t expect Palmer to return to his old form against the Giants.

New York is simply playing too well right now for that to happen. Both cornerbacks, Aaron Ross and especially Corey Webster are performing at a very high level. Justin Tuck is one of the best pass rushers in the NFL. On offense, the newly dubbed “Earth, Wind and Fire” backfield is giving opponents fits with multiple looks and fresh legs.

Expect a similar script to last weekend. The Giants will open with a healthy dose of Brandon Jacobs and Plaxico Burress. As the game goes on, New York will open bigger holes and complete bigger plays. It may be a game for a little while, but the Giants will head into their bye week with a 3-0 record.