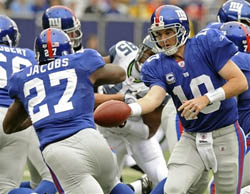 Browns’ tackle, Corey Williams, has vowed to “try and knock (Brandon Jacobs’) head off”. That may be the only way to stop Jacobs who is on pace for over 1,400 yards and is averaging almost six-yards a carry. But Jacobs is just part of the story as the Giants have three running backs who can carry the load and weapons all over their league-leading offense. They even get one back tonight with Plaxico Burress returning from his suspension. And their defense isn’t too shabby, ranking in the top-5 in almost every statistical category.

Their opponent, the Cleveland Brows, have been one of the biggest disappointments of the NFL season. Last season they were on the verge of a playoff spot and one of the best offensive squads in the game. This season they are 1-3 and last in terms of points scored. Derek Anderson is a mess and it is only a matter of time before he is replaced with Brady Quinn. To make matters worse, Kellen Winslow, their talented tight end is listed as doubtful for tonight’s game. The crowd will be into it and the Browns may show similar emotion, but the Giants should have little trouble handling Cleveland and improving to 5-0.

#brandon jacobs
#football
#giants
#plaxico burress
#sports
Do you know the scoop? Comment below or Send us a Tip