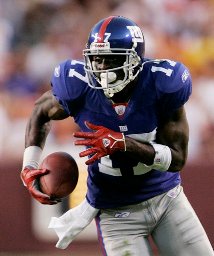 It’s pretty simple for the Giants this week. Win and the 6-2 start is validated in the eyes of the critics. Lose and the assertion that all they have done so far is beat up on weaker teams looks more plausible. It’s a foolish argument, but it’s the reality of the 24/7 sports media.

And, while it is true that the Giants started off 6-2 under Tom Coughlin last year only to finish 8-8, there is a huge difference this season, health. The Giants emerge from their bye week in very good shape. Plaxico Burress (pictured) actually practiced this week, albeit sparingly, and apart from Steve Smith and Derrick Ward everyone else should play Sunday.

That’s important because the Giants will have to figure out a way to contain Jason Whitten and the rest of the Cowboys offense. Expect them to try and bring a lot of pressure against Dallas and the four defensive ends will probably be on the field frequently.

On offense, the Giants will hope to repeat he success they had against Dallas in their first meeting this year. Brandon Jacobs will mix in the rush, but look for the Giants to try and pass their way to victory. It should all add up to a great game and Gothamist thinks the Giants pull it out in the end.