Giants Look To Improve To 9-1 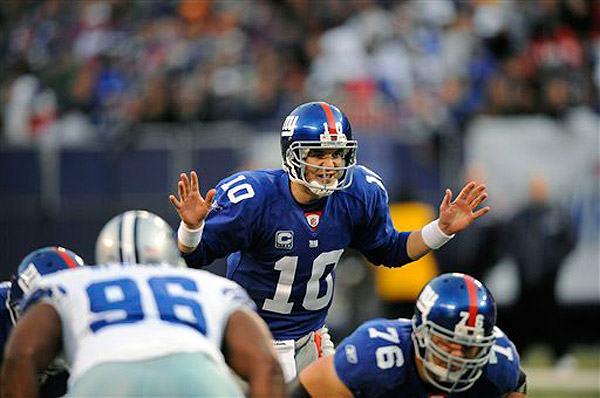 Photograph of Eli Manning, calling signals during the November 2 game against the Cowboys, by Bill Kostroun/AP

It doesn’t get any easier for the Giants as they face the 6-3 Ravens tomorrow at Giants Stadium. Baltimore has won four-straight games and sports one of the best defenses in the league, allowing only 16.7 points a game. Like the Giants, the Ravens have three running backs and their rookie quarterback, Joe Flacco, has been solid under center.

Still, the Giants are clearly on a roll and will be difficult to beat on their home turf. The game plan will be familiar with Brandon Jacobs pounding the ball and Derek Ward providing a changeup. New York will probably try and get Plaxico Burress more involved with the passing game, but Eli Manning has shown a willingness to spread the ball around, hitting six-different receivers the last few matchups.

It will be a hard-hitting meeting with plenty of defense, but the Giants have enough weapons that they should prevail in the end.

#brandon jacobs
#derek ward
#Eli Manning
#football
#giants
#plaxico burress
#sports
Do you know the scoop? Comment below or Send us a Tip