Giants Look To Corral The Cowboys 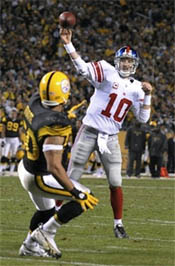 Everything is setup for the Giants. Tony Romo is out and Brad Johnson is in as quarterback of the Cowboys. Jason Witten hasn’t practiced all week and has a broken rib. In short, the team that Dallas brings to the Meadowlands tomorrow has little resemblance to the team most people thought would represent the NFC in the Super Bowl this February.

Expect the Giants to take advantage of that. One thing that Antonio Pierce has stressed repeatedly is the importance of division games and he has even said that the Giants would like to be perfect in them. That will be a huge struggle, but beating a depleted Dallas squad at home won’t be. Expect the Giants to attack a weak secondary and expect them to do so successfully. The Giants will win and improve to 7-1.

Photo of Eli Manning throwing a touchdown by the AP

#Antonio Pierce
#football
#giants
#sports
Do you know the scoop? Comment below or Send us a Tip
A new Gothamist is coming! We’ve moved comments over to our beta site. Click here to join the conversation and get a preview of our new website.