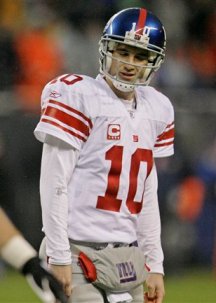 The Giants head into Week 14 with a remote chance to clinch a playoff spot, but a win over their hated-rivals would be reward enough at this point. Coming off of a great win against Chicago, Eli Manning will hopefully show some confidence and the defense, while unsure if they can duplicate their previous effort, dominated the Eagles the last time they met.

Beating Philadelphia means containing Brian Westbrook. Westbrook didn’t play the first time these two teams met and he is one of the most dangerous players in the game. He already has almost 1,600 yards from scrimmage and he will return a punt if the Eagles are in a tight spot. Philadelphia should also get Donovan McNabb back this week as he practiced for the first time in three weeks and is expected to go.

On defense, the Eagles will blitz early and often, trying to knock Manning off of his game. This has worked in the past and with the Giants missing most of their running game, it could be devastating. Gothamist thinks the Eagles prove to be too much for the Giants and knock them off in Philly.

Photograph of Eli Manning after throwing an interception in last Sunday's game against the Chicago Bears by M. Spencer Green/AP