Giants Head Back to the Desert to Face Cardinals 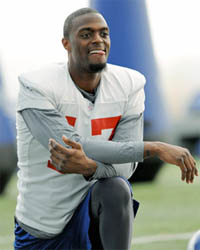 The Giants return to the scene of their Super Bowl victory Sunday when they take on the Arizona Cadinals. Arizona, quarterbacked by former Giant Kurt Warner, is miles ahead in the NFC West at 7-3 and boast one of the best offenses in the league. Arizona moves the ball down the field with the prolific passing of Warner and an all-star trio of receivers.

For the Giants, the biggest questions are injury related as Plaxico Burress is listed as questionable and Brandon Jacobs probable. Luckily, the Giants have plenty of depth on offense and this game will rest on their defense. If you give Kurt Warner time, he will pick apart your secondary and the Giants will make sure that doesn’t happen. Steve Spagnoulo will have his defense stunt, blitz and get in the face of Kurt Warner. Expect a lot of points from both sides, but the Giants will do just enough to pull out the win.