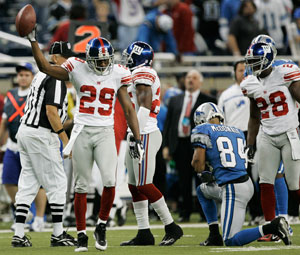 It was a big win. It was a lucky win. It was a costly win. And while Jon Kitna may not think the Giants are better than Detroit, in the end they were good enough to beat them 16-10.

New York appeared to have the game in control when they got the ball back with a 16-3 lead and only ten minutes to go in the game. But, the Giants’ offense stalled and Detroit needed only 4 plays to go 82 yards for a touchdown that changed the game. The Giants got the ball back and couldn’t do anything with it and so the Lions were setup with all of their timeouts and the ball with just over two minutes to go in the game. But, James Butler got an interception to apparently seal the game. That was until the offense again failed to move the ball and Tom Coughlin inexplicably tried a pass when the Giants could have just run the ball and forced the Lions to use their final timeout.

So Detroit had the ball again with a timeout and 1:25 left on the clock. Two quick completions put the ball on the Giants 43 and Detroit would have kept driving if Shaun McDonald hadn’t let a ball go right through his arms that Sam Madison intercepted to finally ice the game.

The win puts the Giants two-games up in the wild card race, but it came at a steep price. Mathias Kiwanuka broke his leg and Brandon Jacobs left the game with an injured hamstring. Both players were key members of the team and while it looks like Kiwanuka’s season is over, the Giants will have to hope that Jacobs is a fast healer.

#brandon jacobs
#brandonjacobs
#detroit
#football
#games
#giants
#jon kitna
#jonkitna
#Mathias Kiwanuka
#mathiaskiwanuka
#new york
#news
#race
#Sam Madison
#sports
#the game
#The Giants
#tom coughlin
#tomcoughlin
Do you know the scoop? Comment below or Send us a Tip
A new Gothamist is coming! We’ve moved comments over to our beta site. Click here to join the conversation and get a preview of our new website.