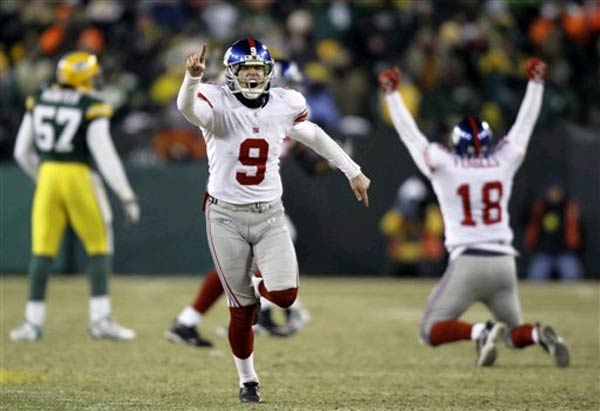 The Giants won the NFC Championship in overtime, beating the Green Bay Packers 23-20 in overtime and overcome the frigid, below-zero conditions. They are now headed to the Super Bowl where they will meet the New England Patriots, who beat the San Diego Chargers 21-12.

Giants kicker Lawrence Tynes missed a field goal as time expired in the fourth quarter, sending the game to overtime. Packers won the coin toss and received the ball, but Brett Favre threw an interception in Green Bay territory. Tynes got a chance to redeem himself and kicked the winning field goal from 47 yards away (overall he made three of five field goal attempts). And Giants quarterback Eli Manning had a good game, especially given the conditions, completing 21 of 40 attempts for 254 yards, no interceptions. Favre completed 19 of 35 for 236 yards but with two interceptions.

We'll have a more detailed write-up tomorrow, but in the meantime, should we chalk this up to the East Coast media conspiracy, with a Northeast Super Bowl? Mayor Bloomberg can expect the goods from his bet with Green Bay Mayor James Schmitt and we bet Tiki Barber's feeling pretty bummed right now!

The Super Bowl will be held in Glendale, Arizona on February 3 - get ready for non-stop Big Blue coverage from the local papers.