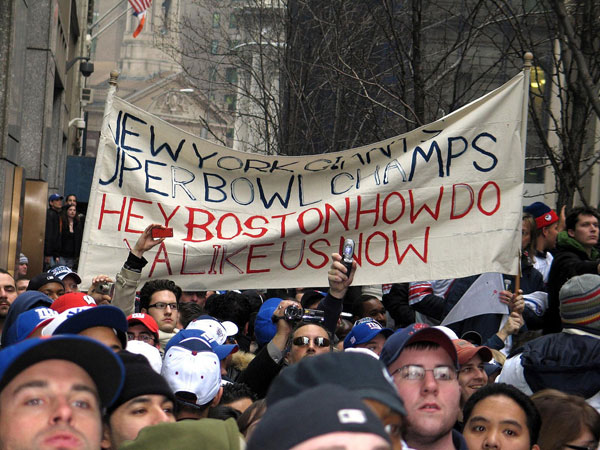 After the many floats with Giants players (and cars with some dignitaries, like Governor Spitzer, Senator Chuck Schumer, and Assembly Leader Sheldon Silver) rolled up the Canyon of Heroes, Mayor Bloomberg presented the team with keys to the city. When David Tyree, whose amazing catch in the final minutes of the game helped the Giants to victory, received his key, people cheered loudly and the Mayor said, "He showed he could use his head." (BTW - "TYREE1" is totally available for the NY State DMV's new Super Bowl Champ license plate!)

During his remarks, Super Bowl MVP quarterback Eli Manning said, "This is the greatest city in the world. And now it's the greatest football city in the world." And Michael Strahan trash talked to the Patriots at his turn at the lectern, "We stomped you out!" - even stomping with the whole team, making us worry about the platform they were on. 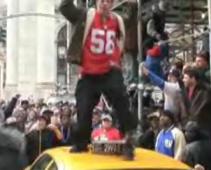 A devoted fan who traveled from NJ to Arizona to see them play in the Super Bowl was at the parade; Lori Pletenik told the NY Times, "I’ve been to Mardi Gras, New Year’s Eve in Times Square and Carnivale in Rio, and this beats them all." Parks Commissioner Adrian Benepe basically had the same reaction, "[This] reminds me what it must have been like when the legions returned to ancient Rome."

Naturally, with 3 million people and spirits running high, there were some arrests in the chaos. Some rowdy fans jumped on top of cars and buses, including a NYPD cruise disguised as a yellow cab. Newsday has the hilarious/depressing footage.