GI Rather Be Shot & Face Prison Than Go Back to Iraq 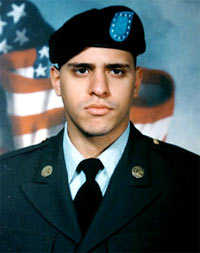 Soldier Jonathan Aponte is facing criminal charges of conspiracy and falsely reporting an incident after admitting that he hired a hit man to shoot him. Why did he hire a hit man? Because Aponte didn't want to return to Iraq.

The 20-year-old Bronx resident, his wife Alexandra Gonzalez, and the "hitman," Felix Padilla, all face jail time for the plot. Aponte had apparently joked that he wanted to get shot in the leg to avoid returning to Iraq. From the AP:

But his wife took the off-the-cuff remark seriously, and said she knew a man named Felix who could do the job.

"I decided I wasn't going to go back, one way or another," he said.

Early Monday morning, the pair met with the man, who agreed to do the job for $500.

"I smoked a cigarette and kept my eyes closed because I did not want to see it coming," Aponte told an investigator. "Next think I knew I was shot in the knee."

The hospital's doctors and nurses questioned Aponte when he came in for the gunshot wound, and that's when the plot was revealed. Aponte told the Daily News, "I have nightmares all the time. I hear people screaming, gunshots, explosions, and I can smell burning flesh in my dreams... I was desperate to stay home and at the end of my rope. couldn't deal with being in Iraq anymore. Would I risk going to prison? As far as being shot at, I think it's better." He also mentioned that on his first day, a female sergeant killed herself in the mess hall.

WCBS 2 interviewed Aponte - you can see the video here - and he emphasized how he felt very desperate. His mother said he has post-traumatic stress disorder, "He was asking for help, but we didn't know what he was asking for. We didn't understand."

Aponte and Gonzalez were released under their own recognizance. The military is reportedly working with Aponte to evaluate his mental health and whether he should be sent back to Iraq.