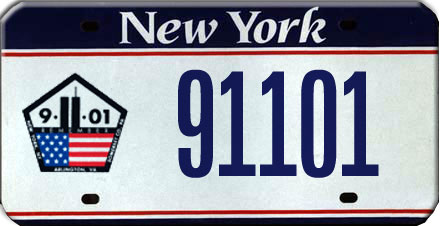 Arno Herwerth, the Long Island man who the DMV rejected his GETOSAMA vanity plate, then sued them now wants to have a 9-11 commemorative license plate available to the Empire State’s motorists – something several other states have for their drivers.

However, in New York then Governor George Elmer Patkai vetoed the idea in 2006 and put the brakes on any new optional license plates thanks to a pro-life groups suing states, including New York, over trying to get plates with their message out. No word yet on whether Governor Spitzer, who had to deal with the pro-life plate lawsuit as Attorney General, will give new optional plates a green light.

State Senator Kenneth LaValle (R, Port Jefferson), the original sponsor of the plate bill in Albany, told Newsday. "License plates are an important visual reminder that we lost lives of our citizens and we need to think about that and not forget." The World Trade Center Memorial Scholarship Program would have been a beneficiary of some of the revenue from the sale of the plates.

Funny, we thought that license plates were a way to identify vehicles and to make money for the DMV, which offers dozens of different extra cost optional plates – all of which the Assembly and Senate spent time writing bills about and voting on them.

Mock up of 9-11 New York license plate by author, based on other states' designs