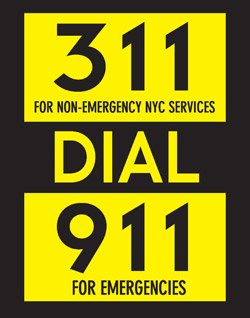 If you think 911 is a joke, things may improve by 2009 if everything goes as planned. The Bloomberg Administration has unveiled a $1.5 billion plan to improve the emergency call system with a backup center and consolidation of 911 operators and dispatchers in two call centers. The city has previously attempted to overhaul the 911 system but delays and budget problems scuttled the plans. The current system has had its problems, shutting down four times in 1999 (including one 67 minute span) and for two hours in parts of Brooklyn, Queens and Staten Island in 2004.

The new system's call centers (there is only one right now) would be at the MetroTech Center in Brooklyn as well as a new building in The Bronx. While the plan's goal of having operators from different agencies together at MetroTech by March of 2009 seems possible (the facility at MetroTech is almost finished), the new center in The Bronx has some hurdles. The land is currently owned by Simone Development Company and the city is readying its court case to seize the 8.9 acres they need for the new call center. If acquiring the land requires a trip to court, the July 2009 groundbreaking seems like a stretch.

One time-saving (and potentially life-saving) change is that emergency calls will not be re-routed after they are received. Currently, Police Department workers answer calls but transfer fire and EMS calls to their respective operators depending on the emergency. The plan calls for the police operators to send computer messages to fire and EMS dispatchers.

The overhaul also includes provisions to transport workers from one call center to another in case of emergency, a fully redundant system, and the ability to see images from street cameras on computers in the call center.