Get Ready: John McCain is Arriving in NYC Today 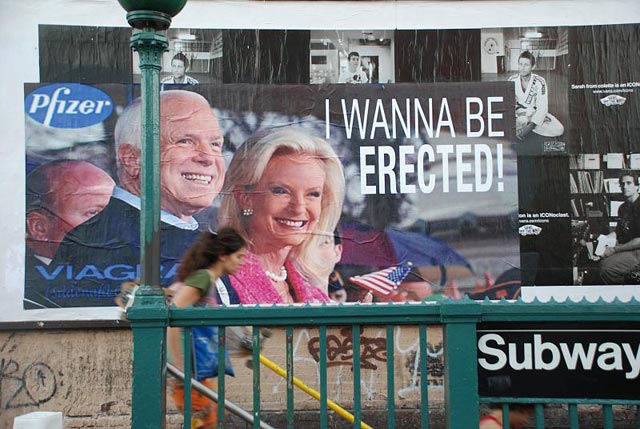 A reader in midtown Manhattan wrote:

I just got word from our building that John McCain will be arriving sometime today at the Hilton at 54th and 6th for his and Palin's night in the Big Media Elite Den of Sin. 54th Street between 6th and 7th Avenues will be closed at times today and tomorrow, apparently. If it's anything like Bush's visit a little while ago, there will likely also be limited pedestrian access and heavy police presence with snipers on roofs.

Ah, yes, the McCain-Palin camp is getting ready for tomorrow's debate at Hofstra (where McCain has implicitly promised to mention Ayers!) by coming to town. Plus, on Thursday, he'll appear on Late Night with David Letterman, though Dave expects to be canceled on again.

Also, this afternoon, at Books of Wonder on West 18th Street in Chelsea, McCain's daughter Megan will be "debating" with Bryan Collier. Megan McCain has written a children's book about Walnuts—My Dad, John McCain—while Collier's book is Barack Obama: Son of Promise, Child of Hope.

#barack obama
#debate
#john mccain
#Megan McCain
#nyc
Do you know the scoop? Comment below or Send us a Tip