Get A McDonald's Happy Meal For Every Third Stop And Frisk! (Wink!)

In an obvious parody that we really wish was real, a website claiming to be affiliated with McDonald's and the NYPD is promising a free Happy Meal for every person who is stopped and frisked three times without charges. All you gotta do is print out the voucher below, and jot down the officer's badge number every time you're stopped. Once you hit the magic number, bring the voucher to any McDonald's and exchange it for your delicious prize! Mmmm, who knew the police state could be so tasty! In this video, a man claiming to be a McDonald's manager explains how the "Three Strikes, You're In!" offer came to be:

Three Strikes, You're In! from 365Black.com on Vimeo.

"'Stop and Frisk’ gets dozens of guns off the streets each year, makes respectable citizens feel secure, and lets would-be criminals know that we’re watching them,” said NYPD Commissioner "Ray Kelly" in a statement which, again, is obviously a parody. “It generates some resentment in these low-income communities, since most of those stopped are innocent, but with the help of McDonald’s, we’re showing we understand. We can’t afford to change ‘Stop and Frisk,’ but we’re happy to compensate those who are stopped in the course of keeping the City safe."

We really hope someone tries exchanging one of these vouchers at an area McDonald's and documents the encounter! Last month, Councilmember Jumaane Williams proposed a law that would require every officer who stops and frisks someone without making an arrest to give out a business card with his name, rank and unit. (At press time, it was unclear if NYPD officers are also eligible for the "Three Strikes You're In!" deal) 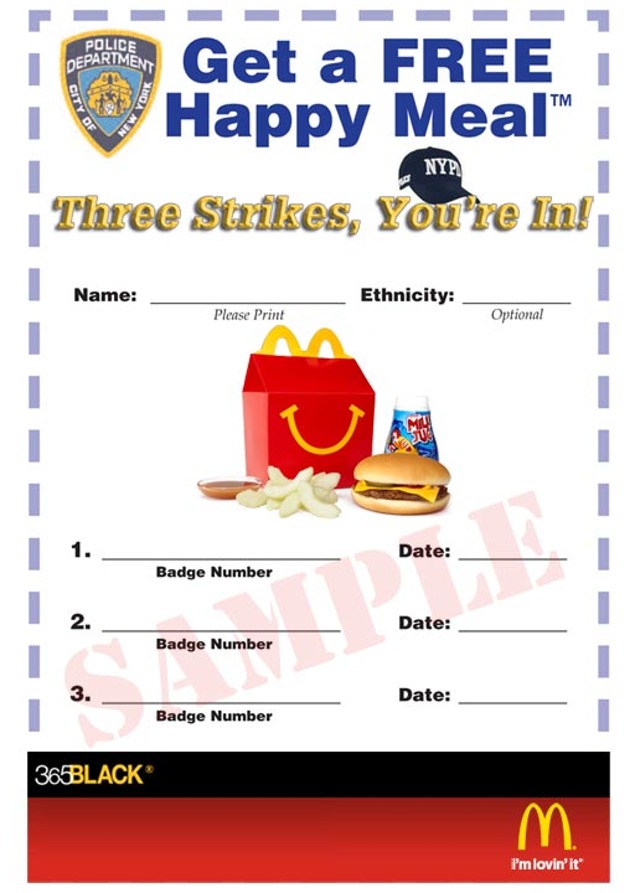 #happy meal
#mcdonald's
#stop and frisk
Do you know the scoop? Comment below or Send us a Tip