Gerritsen Beach's Zone B Horror: "No One Was Ready" For Storm Surge Gerritsen Beach, the little peninsula community in Brooklyn, was designateded as Zone B, so residents weren't worried when Mayor Bloomberg ordered a mandatory evacuation of Zone A as Hurricane Sandy barreled our way. But when the intense storm hit, homes were ravaged, with the surge brining 5-8 feet of water to flood houses. Daniel Cavanagh, lieutenant with the volunteer Gerritsen Beach Fire Department, tells us, "No one was ready, no one had medications," as he and other "vollies" rescued frantic residents from their homes all night.

Cavanagh, who also runs GerritsenBeach.net, and his colleagues had been steadily fielding calls on Monday. and as the storm got stronger they kept coming. By the 6:30-8:30 p.m. period when high tide was hitting the flooding was steady. Besides worrying about getting residents (including an elderly woman in a wheelchair) to safety, firefighters had to worry about protecting the fire engine from the rising water!

They nearly lost the fire engine twice as the surge powered down Gerritsen Avenue, which is the only way in and out of Gerritsen Beach. Cavanagh says the surge went from the water's end of the avenue all the way to the school, nearly a mile away! 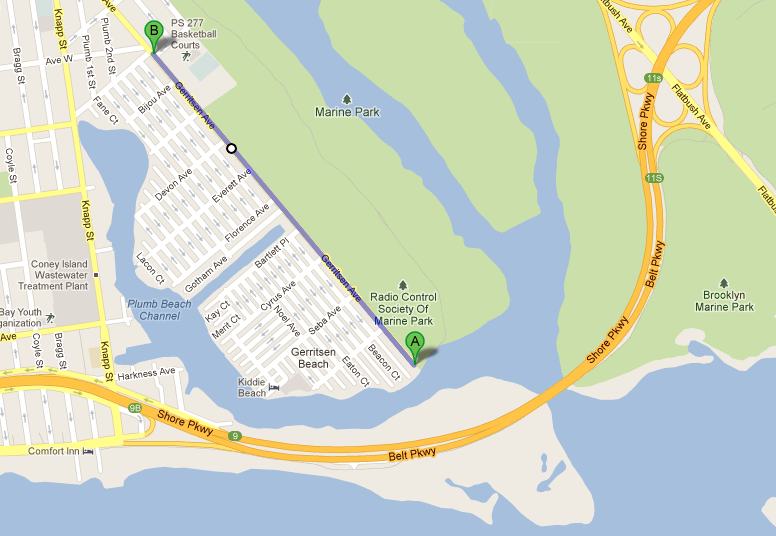 Residents trying to leave by car found that the surge was coming too fast and the water killed their engines. They abandoned their cars, some with infants in their hands, and started walking away from water, trying to make it through the lake-like intersections. Cavanagh says it was like a scene out of The Walking Dead, with people walking in the streets "like zombies" as cars floated away. He didn't stop working until 4:30 a.m. and the next day he was there at 8 a.m., to help with more rescues. He worked Wednesday and Thursday too.

The community is still without power. While there's hope that water can be turned on soon, when power was restored to Manhattan Beach there were numerous fires from the sea water's reaction with the electrical wiring (many electrical panels are in basements, which were flooded). Yesterday, a 67-year-old man was found dead in his home on Dare Court in Gerritsen Beach—he was apparently trapped in his basement—and State Senator Marty Golden announced, "I issued a request to NYC Office of Emergency Management asking that Gerritsen Beach be reclassified as a Zone A for evacuation declaration."

If you want to donate to the victims in Gerritsen Beach, you can bring them to Resurrection School (2335 Gerritsen Avenue) but the school needs to be ready for students on Monday, so bring your donations before Sunday evening. The Gerritsen Beach Fire Department at 52 Seba Avenue is also accepting donations. These are the items most needed: Non-perishable foods, Industrial brooms & rakes, Toothbrushes, Work gloves, Bleach, Toothpaste, Work boots, Construction Masks, Deodorants, New Socks, Hand Sanitizer Soap, Adult Diapers, Heavy duty garbage bags, Baby Wipes, New Underwear, Batteries (all sizes), Toiletries and Blankets. You can also donate money to the Gerritsen Beach Fire Department's fund.

When asked if victims might want gift cards to Target or Home Depot, Cavanagh grimly noted, "How are they going to get there? Their cars are toast."

#brooklyn
#flooding
#gerritsen beach
#horror story
#hurricane sandy
#zone b
#original
Do you know the scoop? Comment below or Send us a Tip