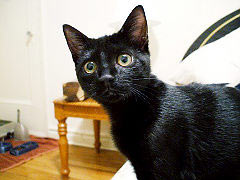 Georgia's been on a lot of people's minds since news of her disappearance became public in January, but she is now safe at home. The black cat escaped owner Ashley Phillips' pet carrier while they were waiting on the platform at 59th St. for a 6 train, on their way home from the Humane Society where Georgia had just been spayed. She survived 25 days in the subway tunnels before being found and rescued.

The lucky feline's discovery and recovery was not a chance happening. The Daily News reports that Georgia's rescue was in no small part due to the efforts of track workers who went well beyond their normal work duties to find her. After a Con Ed worker reported seeing a cat in the area where she initially went missing, MTA track flagman Mark Dalesssio and track inspector Efrain LaPorte were determined to find Georgia.

"As I was walking down the track, I was making cat sounds, meowing," Dalessio told the Daily News. "I heard a 'meow' back and I thought it was LaPorte. I thought, 'Wow, LaPorte is inspired.' "

The frightened feline was taking shelter in a foot-deep metal drain between two tracks when she was spotted.

As Dalessio extended his hand toward the cat, sweet Georgia gave him a lick.

The two track workers, who are all too aware of the dangers of the subway system, called the police and two transit cops effected the rescue. Georgia survived slightly the worse for wear--a little thinner and with a scratch on her nose. Phillips is thrilled to have her cat back and is going to have her microchipped for future identification if Georgia is ever again seized with wanderlust.

#59th St.
#As
#As I
#black cat
#con ed
#daily news
#georgia
#humane society
#lost
#manhattan
#MTA
#news
#rescued
#runaway
#subway
#The Police
#Then I
#trackworkers
#transit cops
Do you know the scoop? Comment below or Send us a Tip