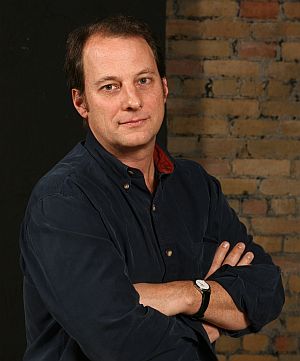 In early 2007, The New Yorker writer George Packer published an enthralling article about the desperate plight of Iraqis who had assisted the American effort in their country and were being hunted down as a result, with little or no U.S. protection. Betrayed, Packer's first play, is based on interviews conducted while in Iraq for the sixth time to research his article; the fictionalized account concerns three young Iraqis – two men and a woman – whose willingness to risk their lives to help the Americans is rewarded with an indifference bordering on contempt. Following tonight’s performance, Pulitzer Prize winner (and My Trip to Al-Qaeda playwright) Lawrence Wright will join Packer for conversation about the war in Iraq. Betrayed continues through March 16th at Culture Project; ticket prices vary.

Your New Yorker article seemed like it would easily lend itself to dramatization. Was that the case? Yes. It was. It was almost unnervingly easy because I had all these transcripts of interviews I had done with Iraqi interpreters and others working with the U.S. They were really powerful interviews, they had a tremendous amount of life history and feeling and detail. And so the voices were sort of insisting that they be heard, that maybe I find some other form because the article, as long as it was, wasn’t able to get into their lives and minds deeply enough and a play is able to do that.

Was it fulfilling to watch your first play performed before a paying audience? You know, it’s still sort of unreal, to tell you the truth. In theater terms this has been a nanosecond; from original conception to performance in eight months is nothing, from what I hear. I didn’t know what to expect; I’d never been involved in a play that wasn’t a junior high school production. It’s kind of unreal and thrilling to see these actors and the set and the direction pulling together what had been raw life.

Will any of the people the play is based on come to see it? Yes, in fact one of them already has. The guy who in the article is called Othman came to a performance the other night. He’s now a Fulbright scholar here and he helped a lot in the rehearsals with the actors and gave them a sense of the nitty gritty of life in Baghdad during the war. He came on Saturday night and he sent me an email after the play and in it he said, among other things, “Please thank everybody on my behalf. Tell them that they made me feel I am not alone in my loss and my grief. And I believe this will be the feeling of every Iraqi who lost someone in this war.” That was the highest praise I could get.

Beyond calling attention to this crisis through your writing, have you done anything further to try and help any Iraqis trying to get out of Iraq? I’ve written a lot of letters of support for applications for citizenship, Fulbrights and asylum cases for people already here. I’m working on one case with a pro-bono attorney. I don’t want to claim to be moving mountains because the mountains won’t move; the government continues to be very resistant but there are little points of vulnerability you can push on and I’m doing whatever I can for my friends.

Have any of those who were alive at the end of the article since died? No, they’re all still around. One of them is languishing in Jordan. He worked for the U.S. for four years, really from the day the U.S. entered his city. Now he’s been in Jordan for eight or nine months and he still has not gotten a visa.

Do you think your commitment to the Iraqis seeking asylum is in some way an attempt to make up for not opposing the invasion of Iraq? Well, you know, who knows what one’s motives are? And I don’t think it particularly matters. It’s an uncharitable reading of the effort that I’m making but I’m not going to argue against it because I don’t really even fully know what my own motives are. And if people who don’t know me think they know better they’re welcome to try but it’s not something that interests me all that much.

Do you hope your play will help the situation? No, I don’t. I didn’t write the play to draw attention to the issue, which is why I wrote the article. I wrote it to do justice to the Iraqis who I met and to explore their situation more deeply and personally. I mean, it’s theater, it’s a human story. It’s a complicated one about loyalty, hope and disillusionment and I don’t expect that it’s going to get the attention of anyone in Washington whose attention I’ve already gotten, without much result. I don’t have any illusions it will be a battle cry; I just hope people come see it in order to be made to think and feel more deeply about this human situation.

Yeah, it’s really affecting and also funny. And the situation is more immediate in a way you don’t get from the article. That’s why theater is such a great medium because it’s alive; you’re in the room and for that hour and forty-five minutes you have a pretty total immersion in their world. I tried to make all the details of language and costume and their humor and the food they eat as real to life as possible.

They seem like very funny characters; was there a lot of laughter when you were with them in Iraq, despite everything? Yeah, there was. There is an Iraqi black humor that’s pretty irresistible to me. And it’s obviously a response to life and history in Iraq. Especially these Iraqis because they’re sort of living in two worlds, so they have an almost inherently ironic world view because they aren’t completely of either of those worlds. So they see what’s ridiculous about both. They can see the humor in religion and tell jokes about American solders, they can make fun of American bureaucracy, they can cast contempt on Iraqi politicians, they are in a perfect position to see the hollowness of all the official versions of all sides of the war. And that’s a source of a lot of humor and sustenance.

What is the current situation with the Iraqis affiliated with the U.S. who are seeking asylum? Do we know how many Iraqis who were affiliated are trying to get out? The numbers of Iraqis affiliated could be counted in the tens of thousands if you include contractors, sub-contractors, Iraqis working for NGOs. And, with their families, they number in the hundreds of thousands. And some of them are among the 2 million-plus Iraqis who’ve become refugees in the Middle East. But the number who have been let in is tiny. Last year, something like 1,600 Iraqis were resettled to the U.S. and no one knows how many of those were affiliated with us during the war effort. But, anecdotally, I think the number’s pretty small.

What do you think has to happen to stop the downward spiral in Iraq and what do you think will happen? I don’t think there’s much we can do to stop it. The things that have arrested it are mainly Iraqi things, like the so-called Sunni awakening with Sunni groups forming a tactical alliance with the U.S. against Al-Qaeda. That’s a factor. The Muqtada al-Sadr organization has stopped its violent activities for the past six months or so. These, together with a better strategy on the part of Petraeus are the reasons, but the forces of disintegration are so large now that certainly the 30,000 American troops used in the surge can’t stop it.

I don’t have an answer. If somehow we could lead a massive regional effort to stabilize the country and really force Europe and the U.N. and the regional powers to see that it’s in their interest, then that kind of combined pressure could possibly move the Iraqi government and some of the non-government factions to cut deals. Local deals, probably. I don’t think there’s going to be a strong central government for years. Maybe the best we can hope for is a series of local truces that hold because they have backing from the neighboring powers and the help of the U.N. and Europe and the U.S. But that’s a tall order.

So you’re not one who thinks that Iraq would be better off to split into a regional federation? Well, we can’t do it and Iraqis have not expressed an overwhelming desire for it. In fact, if anything, whenever it’s brought up there’s a tremendous flurry of nationalistic pronouncements from Iraqis that they won’t allow this to happen. And Iraqis are nationalistic in spite of the civil war going on. I think what’s happening, instead of three ethnic, sectarian federations is a thousand pieces or more. Iraq is really falling into something close to Afghanistan or Somalia, with warlords controlling different regions and no center holding. I think that’s the direction it’s going to continue going for some time.

Some would say, in fact it’s a point argued by an official in your play, that by allowing refugees to take asylum here it’s in effect saying that there is no hope for Iraq. I don’t think it has to mean that. I think it means that this group of people are in mortal danger and we have a debt to them and it’s a matter of honor to discharge that debt. It doesn’t mean we’re leaving en masse, it doesn’t mean we’re raising the white flag of surrender, as politicians like to say. It means we’re being realistic, for once, and facing the consequences of our actions and dealing with them, which we’ve never done during the war.

So this is a microcosm of the failure of the whole war. I would argue that to deal with this problem is the beginning of some kind of sanity and the beginning of actually having a clear-headed policy on the war, because it means taking in facts and acting on them. And that, as I say, is something the administration has really not been able to do.