Brokerage firm Aptsandlofts.com, which previously declared Bed-Stuy to be the new Williamsburg, is equal parts shrewd and maladroit when it comes to marketing. Maladroit because now they're awkwardly using Malcolm X in an ad for a swank new retail office space on Malcolm X Boulevard in Bed-Stuy. Shrewd because look we're giving them more free advertising! (Please make the symmetry complete by clicking on one of our fine American Apparel ads.)

The tipster who forwarded the ad told us, "I never noticed anything unusual about their listings or ads before. But this one just made my jaw drop! It's every bad stereotype of Bloomberg-era NYC distilled into a single ad." Malcolm X was certainly a trailblazing radical who worked tirelessly to "heighten the political consciousness" of African-Americans, as he put it. But to be fair, we're sure he enjoyed a tranquil koi pond as much as the next radical civil rights activist. 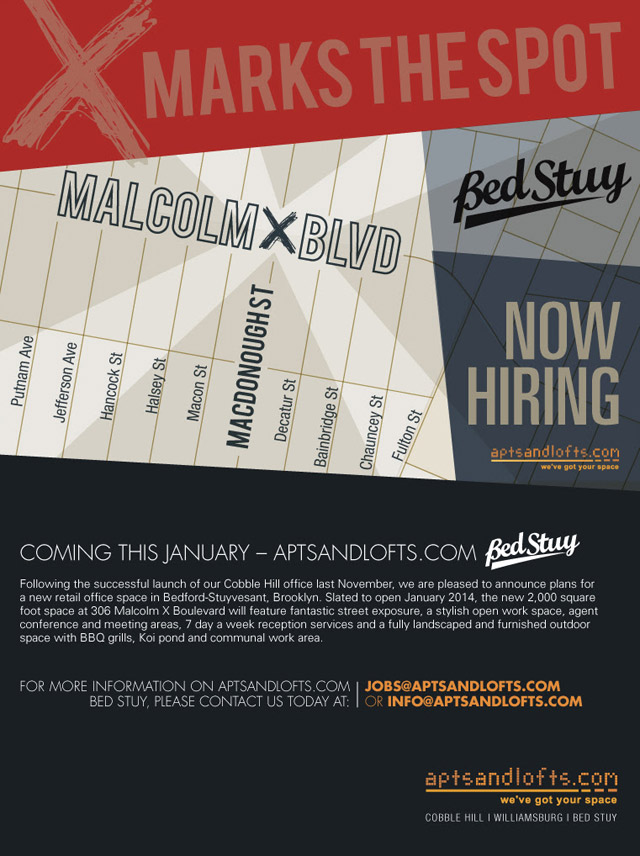 Explaining in his autobiography why he changed his last name in 1950 from "Little" to "X," Malcom X wrote, "For me, my 'X' replaced the white slavemaster name of 'Little' which some blue-eyed devil named Little had imposed upon my paternal forebears." Skip forward half a century, and X marks the spot where the chickens of gentrification come home to roost.