On the surface, there are few positions more fortuitous than living in a rent-stabilized apartment in one of the city's newly hip enclaves—renters can partake of the trendy cafés and lower crime rates without the accompanying bloated cost of living. But what if your landlord is willing to take an axe to your boiler to force you to leave? What if they’re eager to destroy their own property for market-rate rent? Apartment sabotage is real, and gentrification has made it more common than you might think.

"We see this type of stuff in north Brooklyn a lot," said Greg Hanlon, a spokesperson for the non-profit St. Nick's Alliance. "The incentive for these landlords to kick out their long-term rent stabilized tenants is high, because obviously market rate rents are completely through the roof. It seems far-fetched to picture these landlords messing up their own buildings, but they obviously made the calculation."

Catalina Hidalgo, a life-long Greenpoint resident, has lived in her current apartment at 300 Nassau since 2004. When she first moved in, her rent was around $500 a month; it's since increased to $754—a bargain in a neighborhood where a two-bedroom like Hidalgo's typically runs around $2,500 a month.

Hidalgo said until recently, she had nothing but peaceful interactions with her landlords, Joel and Aaron Israel. "I would call, he would answer his phone and say 'Yeah, I'll take care of you guys, whatever it is,’” Hidalgo says. “We never had a problem."

But the good feelings dissolved when the tenants in the apartment below Hidalgo's moved out, prompting the Israels to begin a gut renovation. She sensed something was amiss with the work being done, and quickly discovered that asbestos abatement was being mishandled. Hidalgo, who is a construction expeditor, contacted the Department of Environmental Protection, which launched an investigation. And that, she said, was when the bathroom started to sag.

"Once he got hit with that violation, somehow one of the supporting beams underneath my bathroom floor was removed," Hidalgo explained. The DOB issued a partial vacate order on her bathroom, meaning Hidalgo's entire household—which consists of two 18-month-old twins, her partner and two dogs—would be forced to survive without the use of what is arguably an apartment's most important room. What did they use instead? "Buckets," Hidalgo said. "I would have to bathe my kids in the sink. It was a very tough time for me, because this was a time when I'm trying to potty train my kids and I couldn't."

In September, the Israels’ subtle hints that Hidalgo hit the bricks solidified into an offer: They'd give her $50,000 to move out. She refused. 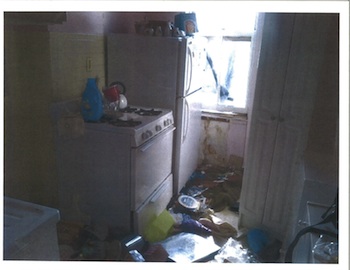 Hidalgo came home one day in December to find that someone had taken an axe to the building's boilers, water heater and electrical systems. The DOB issued a full vacate order to Hidalgo as well as her three neighbors still clinging to their apartments in the six-unit building. Hidalgo and her family moved to a friend’s house in Williamsburg (minus her dogs). Another neighbor is staying with a friend, and the other, at a homeless shelter. She has no idea when she might be allowed to return to her home. Joel and Aaron Israel did not respond to requests for comment.

Hidalgo's story is not unique. Dubois Thomas, a tenant organizer with the Cypress Hills Development Corporation, said the spread of gentrification to neighborhoods like Brownsville and Canarsie means longtime New Yorkers are getting pushed not only out of their homes and neighborhoods, but out of the city.

"The market for housing has expanded enough that there's a demand for expensive apartments even that far out," he said. "I see it coming down Bushwick Avenue toward East New York—I literally see it. It's kind of scary."

Unearthing citywide information on corrupt landlords is difficult, since housing alliances tend to work only in the neighborhoods with which they're affiliated, and don't often share data with one another. Thomas said the phenomenon of landlords sabotaging their own properties is more prevalent in Brooklyn than Manhattan, where housing stock is generally smaller and forcefully evicting an entire building is often measured in a handful of units, rather than hundreds.

In the face of such obvious bullying, why would tenants allow themselves to be treated so badly? Thomas said the trouble is that the case is rarely clear-cut in the context of housing court. If a landlord begins abusing his or her tenants, the tenant might retaliate, for example, by withholding rent. On that basis, the landlord can then bring the tenant to court and have them evicted for non-payment.

Another issue is organizing all the tenants of a building onto the same page. If a landlord offers a payout, as they often do, some residents, unaware of their rights, will take the offer regardless of whether it's remotely fair in the long run. Those that choose to stick around will be doing so without the support of their neighbors, and make themselves especially susceptible to landlord malice.

The case of 17 Legion Street in Brownsville, in which the landlord allegedly started not one, but two intentional fires before locking the occupants out, was one of the worst Thomas had ever seen, he said.

Those residents were able to return to their apartments only because housing advocates busted their way back in with the help of a locksmith.

Marty Needelman, the executive director and general counsel of Brooklyn Legal Services Corporation A, is currently working on seven such instances of landlord sabotage in Brooklyn—three of which have cropped up in the past few months.

At 193 Bedford Avenue, the landlord successfully eliminated 15 of 17 tenants—but those living in the two remaining units were desperate to stay put. The landlord began massive renovations anyway, with the Department of Buildings eventually issuing a vacate order thanks to the building's possibility of "imminent collapse." One tenant of 25 years, a woman named Tranquilina, worked two jobs as a home attendant and a street vendor. Tranquilina moved out of her $700 per month apartment into one in Coney Island that cost $1,400, far from her friends and her two jobs.

Once the building was inhabitable again, Tranquilina found herself locked out—the space had been rented to a young woman from Connecticut for $3,000 per month, a woman who is technically unemployed but whose father is a guarantor on her lease. Tranquilina remains in Coney Island while her case is stalled in court.

The loss of rent-stabilized units is not unique to Brooklyn, of course. A detailed chart [pdf] produced by the Association for Neighborhood and Housing Development indicates that while parts of Brooklyn have taken a substantial hit (nearly 8,000 units have been deregulated between 2008 and 2011), the loss is even more severe in places like the Upper West Side and Morningside/Hamilton Heights: both neighborhoods have lost around 10,000 rent-stabilized apartments over the same time period.

Barika Williams, the policy director at ANHD and the chart’s creator, said that while the incentive for landlords to evict their rent stabilized tenants is high across the city, the propensity for actual sabotage might be greater in Brooklyn.

“It's likely to happen everywhere, its just the strategy of pricing units out might be different in different places. In parts of Brooklyn, it might be more cost effective to harass tenants out, end up with a vacant buildings, demolish them and put up a brand new building that’s twice its size and three times the rent,” she said. “Versus in, let’s say, Washington Heights, the strategy might be to harass out tenants but to keep the building and bring in another set of tenants and increase the rent 1.5 times.”

Another interesting fact of rent stabilization is that once rent hits $2,500, a unit is priced out of the system altogether, enabling landlords essentially to jack up the price by however much they want. Technically, once a unit is deregulated, the landlord is obligated to offer the existing tenant a new lease every year—a potentially unappealing prospect given the option of importing a higher paying tenant.

“If I move in there a year before a unit gets deregulated, I’m entitled to a unit with a five percent increase for the rest of my life. Which landlords don’t like,” Williams said. “It feeds into that enormous pressure to harass people out of units when they are very, very close to being deregulated.”

The best a tenant can hope for is that the judge trying a case in housing court will be on their side, which will result in the landlord being stripped—at least temporarily—of their access to the property, replaced instead by an interim administrator who would oversee repairs made with city money. The New York State Homes and Community Renewal agency recently launched a Tenant Protection Unit, specifically designed to "protect the rights of rent regulated tenants" and "detect landlords' fraudulent acts and non-compliance with housing law."

There are success stories, but they are few and far between. In an instance at 202 Franklin Street, residents were finally able to return to their homes— four years after their landlord started a fire there.

The bad news is that crooked landlords do have the power to eventually regain access to their properties, a prospect that worries Hidalgo. She understands that leaving Greenpoint might make the most sense, but she's lived there for 32 years—her whole life—and she doesn't want to leave.

"It's become so much more, and it's changed so much," she said. "It kind of makes it easier for me. I don't have to go to the city no more. Now I can just literally travel a mile and have the city life."

Good landlords exist, of course, but the prospect of doubling or tripling rents is too tantalizing for many. Williams, the policy director at ANHD, called the incentive to be a bad landlord “perverse.”

#apartment sabotage
#gentrification
#joel and aaron israel
#landlords
#slumlords
#longform
#original
Do you know the scoop? Comment below or Send us a Tip