Earlier this year, the police released surveillance images and video of a man suspected of groping multiple woman in Manhattan. Police arrested a suspect but dropped charges against the Bible study-attending Park Slope man. Now, it's being reported that the police have finally caught their man. 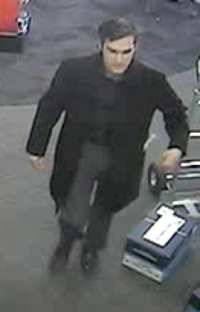 A law-enforcement source tells the Post, "We did lineups with all five victims and four of them positively [identified] him. He’s a dead ringer for the man on the video. It’s him. His MetroCard places him at the crime scenes."

The Post says the suspect is Paul Kraft, 31, who was "charged with five counts of forcible touching and five counts of sexual abuse. He was also hit with one count of unlawful surveillance." He is free on $5,000 bond.

The groper had grabbed unsuspecting women's inner thighs, buttocks, and, as the police described it, "private area." In a March 30 incident, he also "used his cellphone video camera to take shots under her clothes."

The wrongly accused man, Karl Vanderwoude, was pretty forgiving of the authorities, "They were acting on the information that they had. They were just doing their jobs," and added, "I knew this wasn't me, and I would be able to prove it, but at the time, it seemed like it spiraled out of control. I know that it will come out that it's not me, but it is hard to see that and know it's all over the Internet—it's national."

#arrest
#gentleman groper
#groper
#Karl Vanderwoude
#nypd
#paul kraft
Do you know the scoop? Comment below or Send us a Tip