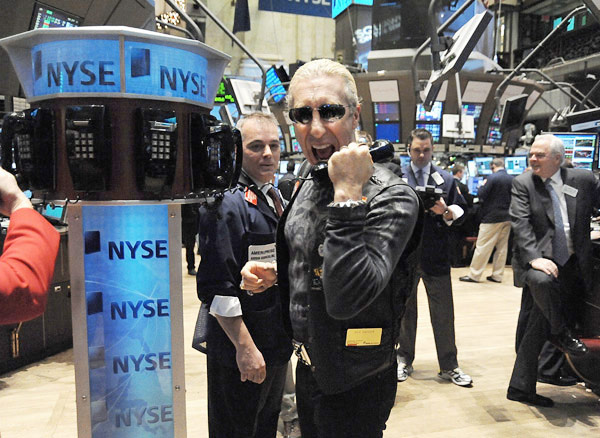 Dee Snider, not a sad guy on a trading floor

The Commerce Department reports that the U.S. economy shrank at a 0.5% annual pace between July and September, which is what they estimated. The bad news, per the AP:

The economy was shrinking in the summer and corporate profits were falling even before the financial crisis struck with full force. Analysts are forecasting that those small declines will be followed by much larger decreases this quarter as the longest recession in a quarter century gains intensity...

...Analysts believe that G.D.P., the economy’s total output of goods and services, is falling at an even sharper pace in the current quarter, reflecting the fallout from the worst financial crisis to hit the country since the Depression.

Some believe the G.D.P. plunge could be as large as 6 percent in the current quarter, which would make it the largest decline since a 6.4 percent drop in the first quarter of 1982.

The good news? Economists think this quarter could be the "low point" of the recession. Somewhat related: This past weekend seemed to have the lowest pre-Christmas shopping turnout in six years, partly due to the economy and partly due to the bad weather in certain regions.

And, yesterday, Dee Snider rang the opening bell of the New York Stock Exchange, promoting awareness for his charity, Bikes for Babies. The motorcycling community partners with the March of Dimes to raise money to prevent premature birth and birth defects.

#economy
#GDP
#recession
Do you know the scoop? Comment below or Send us a Tip
A new Gothamist is coming! We’ve moved comments over to our beta site. Click here to join the conversation and get a preview of our new website.