The gay hoteliers who hosted Republican presidential hopeful and anti-gay-marriage advocate Ted Cruz last week at their swanky Central Park South penthouse say they're sorry, and one went so far as claiming to be unfamiliar with the Texas senator's positions.

In a Facebook mea culpa, Ian Reisner wrote that he was "shaken to the bones" by the backlash, which has included calls for a boycott of the pair's gay-friendly Fire Island Pines Establishments and Out NYC Hotel. He wrote further that he was "ignorant, naive, and much too quick in accepting a request to co-host a dinner with Cruz at my home without taking the time to completely understand all of his positions on gay rights." 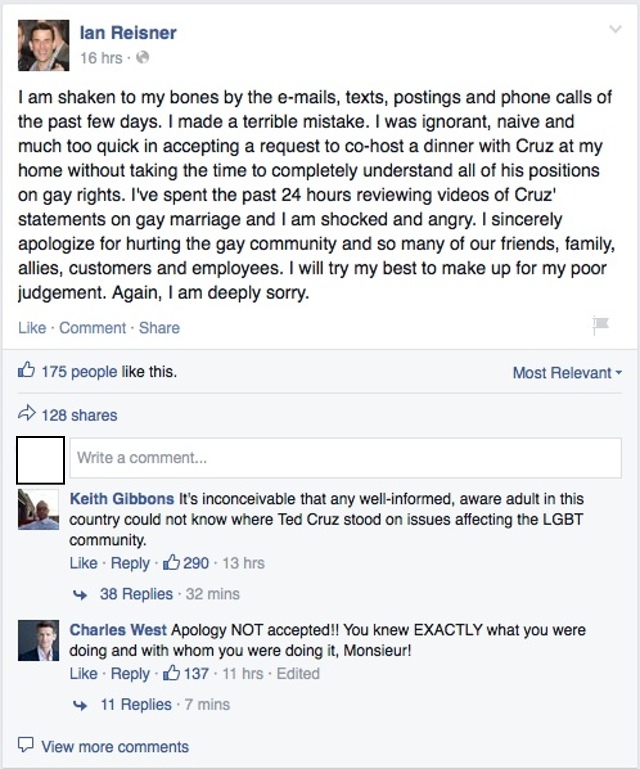 Cruz famously believes that marriage is "ordained by God" to be a heterosexual arrangement, and he is pushing for the federal government to leave alone states' gay-marriage bans, leading Salon to label him the "most stridently homophobic of the GOP's 2016 contenders." 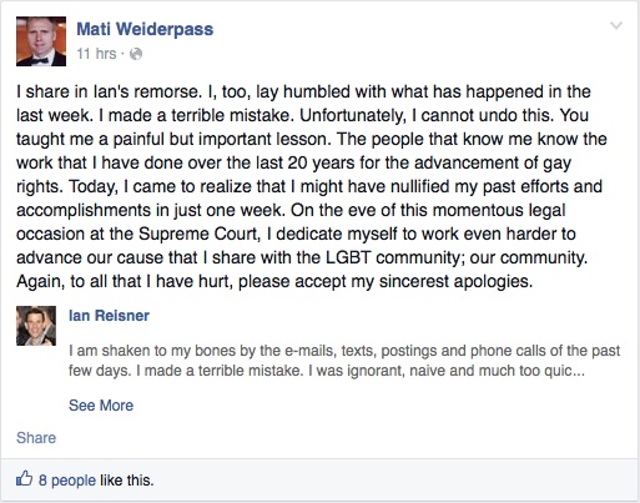 Mati Weiderpass, who co-hosted the "fireside chat" with Cruz, posted his own Facebook apology last night, five hours after Reisner, but didn't try to claim ignorance of Cruz's anti-marriage-equality stance.

The meeting was supposedly meant to focus on national security and supporting Israel, and was not a fundraiser, as the New York Times reported.

The apologies come a day before a planned protest march in front of Out NYC, according to the Times.

#2016 presidential campaign
#bigotry
#gay marriage
#Ian Reisner
#Mati Weiderpass
#ted cruz
Do you know the scoop? Comment below or Send us a Tip