Gay Marriage is Just Hours Away in California 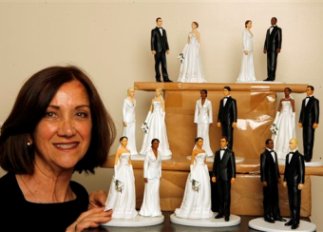 In two hours, the state of California will start issuing licenses for same-sex marriages.

While ceremonies won't officially begin in Los Angeles County till tomorrow morning, the marriage of Robin Tyler and Diane Olsen will take place in Beverly Hills today. Tyler and Olsen are the who were denied a license at the Beverly Hills courthouse back in 2004 and "challenged that rejection all the way to the California Supreme Court." Tomorrow, Star Trek's George Takei plans to marry his partner Brad Altman at a new marriage license-and-ceremony facility in West Hollywood.

Only three counties in California are staying open late to issue licenses and perform ceremonies--Alameda, Sonoma and Yolo. In San Francisco, there's a private ceremony scheduled at City Hall (as SFist notes: "read: VIP photo-op") tonight, but the clerk's office will open at 8 a.m. and remain open till 8 p.m tomorrow. Naturally, there will be protesters tonight and tomorrow.

And California's legalization of same-sex marriages means New York couples are heading to Golden State: One study shows that over 12,000 NY gay couples will travel to California to be married.

Photograph of Ellie Genuardi, whose company makes wedding cake toppers in various ethnicities that can be customized for same-sex unions, by Damian Dovarganes/AP

#california
#gay marriage
#NY
#NY State Constitution
#same sex marriage
Do you know the scoop? Comment below or Send us a Tip