Gawker So Over, Nothing to See There, Says Times 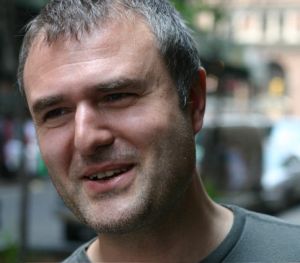 After a turbulent couple of months at Gawker, the New York Times Style section is checking the media website’s pulse and wondering, with equal parts hope and desperation, if Gawker has finally jumped the “snark”. The Times’s uptick in Gawker stalking mirrors their aggressive game of catch-up with “teh internets” by increasingly emphasizing blogs on their website, and the article finds the Gray Lady digging a nice, cozy grave for Gawker owner and editor Nick Denton, pictured, to curl up and die down in, thereby releasing his zillions of page views to the cosmic trough.

As Denton himself was quick to point out, reports of Gawker’s demise have been greatly exaggerated before, with shark jumping cited by The Sun in 2004 and again in 2005 by Felix Salmon, who foresaw the end when Gawker posted a sex tape starring Fred Durst, “vocalist” of “band” Limp Bizkit. Salmon, who writes for Portfolio, is still determined to see his prophesy fulfilled; he’s bet former Gawker managing editor Lockhart Steele lunch at Lever House that the site won’t be able to match an October high of 11.5 million page views anytime soon. Salmon tells the Times:

The more skeevy stuff they post, the less respectable the site becomes and the less people consider it a place for useful stuff. I don’t get the impression it’s a media insider must-read the way it used to be.

The Times looks askance at Denton’s commitment to keeping all Gawker posts under 200 words, because, as he puts it, “any good idea can be expressed at that length.” Maybe that sounds fatuous to those who like their sprawling New Yorker shit, but when it comes to the fiercely competitive internets, where videos of ottoman humping are but one click away, TLDNR = death. The flipside of too much brevity, of course, is a loss of color and contextualizing, which a wordier post like this exemplary tome achieves at a logorrheic 322 words and counting. (You're not watching that ottoman video, are you?) As Rachel Sklar puts it, there’s been a “dilution of content” on Gawker.

And readers have begun to mutiny. In an effort to deprive Denton of ad revenue generated from the page views their comments trigger, a percentage of the Gawker commentariat has decamped to this blog. A terrible idea! And probably one that motivated Denton to address the perennial shark jumping accusations and open the floor to comments this morning. Also, the Times published an IM exchange between Denton and Richard Morgan, who was hired to cover TV but quit after one day in Dentonland, echoing the above-stated criticisms.

So! Will Gawker turn the beat around after a big December decline in page-views? Will Lockhart buy lunch? Does anyone actually care? Heat up some hot pockets and stay tuned!!