Attention Gawker commenters: Nick Denton needs you to pick up his dry cleaning. Though it sounds too good to be true, it seems that eager young Gawker interns are working their way up the new media ladder on the strength of their smug observations, sarcastic bon mots and impassioned diatribes on all things trivial. Will the "first!" be the first to be hired?

Yesterday cewebrity heartbreaker, CollegeHumor co-founder and Gawker darling Jakob Lodwick posted an IM chat with Gawker owner/editor Nick Denton which, if not actually a joke, exposes the true identity of many Gawker commenters. 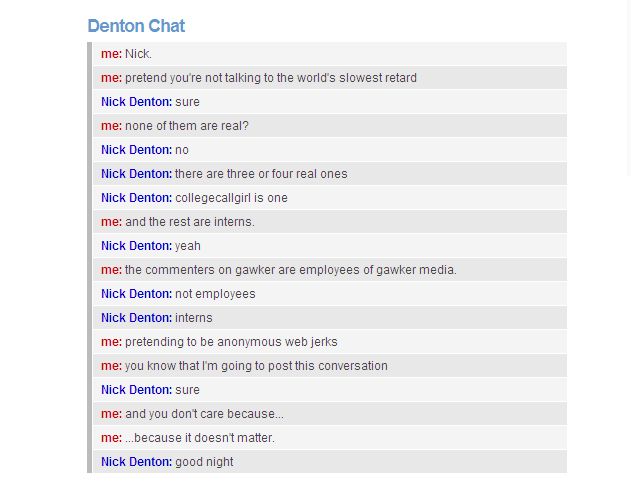 Hmm, not such a bad idea. How about the next commenter brings us a couple lattes with their comments and we'll take it from there?

UPDATE!!! In case anyone missed the part where we cautioned "it sounds too good to be true" and "if not actually a joke", we've heard from both sides of this "story" and the "plot" has "thickened." In one corner, Nick Denton says (via his iPhone, naturally): "of course that IM exchange is fabricated! please, duh." From the alleged fabricator, via his website: "To me, the point is kind of moot: Even if Nick were lying to me — even if the commenters are real people — they cannot prove that they are real unless they give up their anonymity..."

ANOTHER UPDATE!!! Not mollified with our first update, which again stressed that this could all be a joke, Nick Denton now has a follow-up: "Jakob Lodwick is a prankster. And you fell for it. Do you really think that we would hire thousands of interns to pretend to be commenters? And, even less likely, that I would ever admit to the scam even were it true? Next time, turn on your bullshit detector."

En route to pants the entire city of Baltimore, Lodwick could not immediately be reached for comment – if in fact Jakob Lodwick even is his real name.