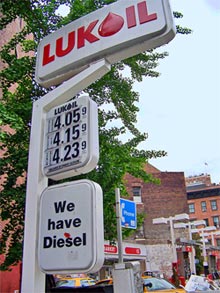 Since the cost of a barrel of oil jumped $11 on Friday, helping the stock market drop 400 points, gas stations in the area made sure to raise their prices, too. The Post reports that many stations were charging $4.50/gallon or more!

While the AAA says national average for gas has gone over $4/gallon for the first time this weekend, many gas stations in the area have been near or above that for a few weeks. One frustrated driver, a Bronx restaurant owner, spent $120 to fill up his Chevrolet Avalanche truck at the Gulf station at East 23rd and FDR. Tony Robertson told the Post, "I used to drive with the air conditioning on, but now I have to leave it off. It's hurting." He added his restaurant was also hurt by the recent economic woes, noting that his customers are coming in less, if at all.

A Brooklyn driver said he was going to put his car away, "Now it's like, you get your necessities and you go home. No more weekend trips." That's a good idea, since gas may rise to $5/gallon by July 4th. Of course, the reason why gas prices are so high isn't because of inventory--there's actually a lot of crude oil, but with the frenzy, there's a lot of speculation.

Photograph, taken in mid-May, by Pay Paul (The Leader of the WW Tribe) on Flickr