Keyholders at a Bushwick community garden clipped the lock around their green oasis on Wednesday evening after a housing court judge halted their eviction. On Tuesday morning, Eldert Street Garden co-founder Kim Anderson was tending the green space, a lot between two houses near Knickerbocker Avenue, when a marshal arrived with a man she'd never seen before named Abe Berne, a representative of Eldert Bushwick House LLC. They were packing eviction papers.

Anderson was confused. She says she and the 15 or so others who have regular access to the garden—and its 10 vegetable plots, curved path, and bright murals—were prepared for the possibility of having their presence challenged, but had never been served with eviction notices.

"I suppose they could have decided to serve them to a random person standing outside the garden, but no one at the garden is stupid and think if eviction papers come we'll just set them on fire and it'll be fine," she said.

Founded in 2009 by Anderson and friend Rodrigo Gonzalez, the garden has been in peril since last fall, when she says men in unmarked vans started clipping the lock on the gate. Then, in September of 2014, a property record showed up indicating the lot had been sold to Eldert Bushwick House, represented by a man named Harry Schwartz, for $300,000. In January, the company filed to build a four-story house on the lot.

What's strange about all of this requires some explanation. In 1988, a company called M. Lahm Knitting Mills bought the lot at a city auction. Ten years later, it donated it to a nonprofit called Alianza de Damas Unidas de Brooklyn, which ran a daycare in the neighborhood. It continued to sit, unused except for people dumping garbage and construction debris, until Anderson says she and Gonzalez got in touch with two board members—the nonprofit apparently ceased operation sometime in the 2000s—and got permission to start a garden there.

The agreement was entirely verbal, and Anderson says they don't even know who the other board members are, but that the two who they were in touch with expressed shock when told the garden had been sold. 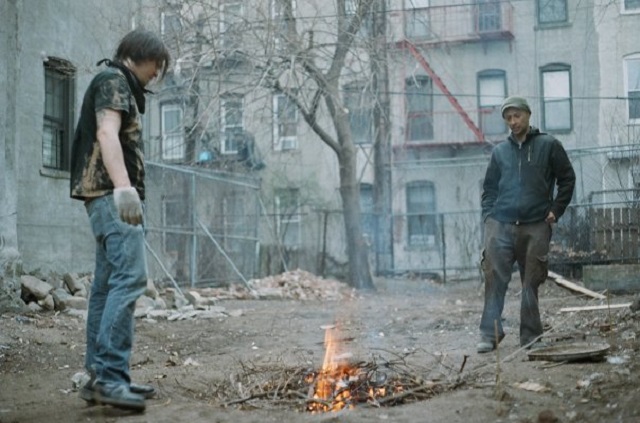 The lot back in 2009, when Scott Edward, left, and Rodrigo Gonzalez were clearing it to create a garden (Eldert Street Garden/Facebook)

Reached by phone, gardener contact and board member Aurea Byron said, "I don't know why you people keep bothering me. I told them at the garden I don't wanna hear from anybody about that." Byron is elderly and may have been referring to investigators from the Attorney General's Office's Charities Bureau, which is probing the sale.

On the sale record, a woman who shares a name with longtime local politico and activist Elba Roman signed off on behalf of Alianza, but the transaction wasn't approved by the Attorney General, as is required. Board president Heriberto Mateo swore in an affidavit that the nonprofit's leadership never approved the sale.

Still, Anderson says men kept appearing last year, once dumping wheelbarrows and furniture onto a perennials bed. Then came the building permits, though the city has blocked their approval, because the application is incomplete, according to a Buildings Department spokesman. In April, Anderson says, workers showed up with boards and locks to barricade the garden and were surprised to find people there. A phone conversation with Schwartz ended, she says, with him cursing her out and her telling him to call her lawyer. Yesterday morning, there was the marshal with the eviction notice. Anderson says she tried to explain that gardeners had been on the lookout for papers and never gotten any.

"I'm going, 'Whoa, how was it possible you have this?'" Anderson said. The marshal told her the papers had been served on a brunette female who refused to give her name.

Behind the locked gate were thousands of dollars worth of gardening equipment, plus the garden itself, which hosts a neighborhood composting program, kids' classes, performances, and recently, a block party and a wedding. Also, there was Mr. Grey, a stray cat they had taken to feeding, who now lives in the garden and needs anti-parisite medication.

The gardeners' attorney Paula Segal filed emergency court papers on Wednesday and a judge agreed to lift the eviction till a court hearing on Friday. Segal is deeply suspicious of the process by which the gardeners lost access to the lot, but she doesn't know who to blame.

"I think that somewhere in here there's a bad actor," she said.

Bushwick Councilman Rafael Espinal said that he is also concerned about the garden sale.

"The garden has been a fixture in the community for years," he said. "It's been a hub for local residents who create recreational activities."

"Overall, it just smells really fishy, and we want to make sure that the garden is in the neighborhood," he added.

Anderson emphasized that she and Gonzalez have backgrounds in landscaping and that the garden, where one volunteer is in the midst of making a turtle pond and another is planning a vertical garden, is "uniquely artistic." She said also that it is a resource for families in a homeless shelter next door, and for everyone in the immediate neighborhood.

"People really let us know that it means a lot that it's there, that it offers a moment of respite," she said. "Just a little, quiet, leafy place to just be a human being."

Gonzalez, a New York native and 10-year resident of the block, said the alleged land grab makes sense given the new construction, renovations, and rising rents that have arrived outside the front gate. He said the garden served as a "neutral ground" to meet with elected officials when he and 100 others were evicted from the loft building at 345 Eldert St. With the latest court notice freshly affixed to the gate affirming his right to be there, Gonzalez clipped the lock on Wednesday afternoon and fed the cat.

Because it's not a crime to snitch on Big Cashmere, here are your end-of-day links: Buying beer near Grand Central Madison, a West Village newspaper feud, three people in a hole on Long Island and more.