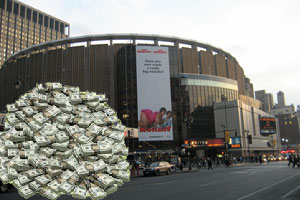 You would think things couldn't get worse for Jim Dolan. After all, the Knicks stink and it seems like Isiah Thomas isn't going anywhere quick (perhaps due to Dolan's own doing). But the City Council started to look into Madison Square Garden's $11 million/year property tax exemption today. David Weprin of Queens sponsored the resolution opposing the exemption saying that "It's very unusual that you have a profitable institution like Madison Square Garden that's been profitable for quite a few years to have an exemption." If the resolution is approved by the City Council, the state legislature (and Assembly speaker Sheldon Silver) would also have to approve the change in status.

Garden officials questioned the motives of Council Speaker Christine Quinn saying that MSG's exemption "pales in comparison to the more than a billion dollars in benefits recently granted to all other pro sports teams in New York City." They compiled figures that the Yankees, Mets, and Nets stadium/arena deals amount to $1.4 billion in government subsidies and $230 million in property tax exemptions over 40 years. The arena's property tax exemption was also questioned by Mayor Bloomberg back when Cablevision/MSG rallied against a proposed West Side stadium for the Jets. In that clash, Speaker Silver proved to be a big MSG ally against any stadium for the Jets.

The "World's Most Famous Arena" has been exempt from real estate taxes since 1982 when the former owner threatened to move the Knicks and Rangers across the Hudson River. Perhaps if Dolan and The Garden does lose the exemption, Dolan would care more about the empty seats at the arena and bitter Knicks fans or maybe he'll threaten to move his teams to New Jersey like their previous owners.

Photo of Madison Square Garden by wallyg on flickr