The family of the 15-year-old boy brutally murdered on a Bronx sidewalk on Wednesday is still reeling from his death. Lesandro "Junior" Guzman-Feliz's mother, Leandra Feliz, said to the Daily News, "He was one of the good kids in the Bronx. He liked to play PlayStation, he liked pizza, he liked Dave & Busters."

And of his killing, she said, "A little kid, alone with no weapon. Five men with machetes came for one little kid. These are men, not kids."

Surveillance video shows a group of male suspects grabbing Lesandro from a bodega on East 183rd Street and Bathgate Avenue and bringing him to the sidewalk before 11:40 p.m. on June 20. Outside, other male suspects join in beating and then slashing the teen (warning: extremely graphic video) with knives and machetes. After the attack, the suspects fled while Lesandro ran, with his neck slashed, to St. Barnabas Hospital a couple blocks away. Another distressing and graphic video shows him on the sidewalk, near the hospital, bleeding. He was eventually pronounced dead at the hospital.

The NYPD released images of six male suspects (video shows five of them) wanted for questioning, plus images of vehicles at the scene. 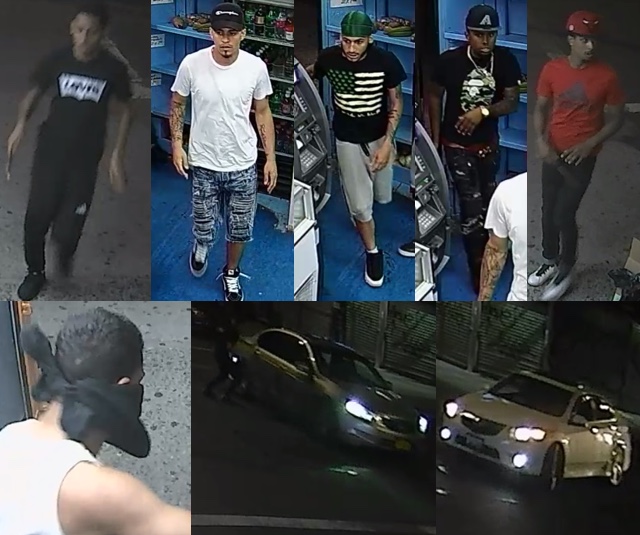 Photos of individuals wanted for questioning, plus vehicles seen at the scene (NYPD)

Leandro's sister and brother-in-law apparently have received social media messages from someone who is a "top leader" with the gang, the Trinitarios, who apologized for the murder. Derek Grullon said the message read, "I'm sorry... I know it doesn't mean a lot. It wasn't supposed to be him."

According to the Post, "The tragic mistaken-identity slay may have been sparked by a raunchy sex video, two high ranking police sources said. Detectives are probing whether Guzman-Feliz’s murderers mistook him for a similar-looking, curly-haired youth who faces the camera prominently in a homemade sex video posted on Facebook."

Grullon also said, "He [the gang leader] said they kicked all of them out of the gang."

Lesandro's family is also demanding a boycott of Cruz and Chiky Grocery, the bodega where he was dragged from. His sister-in-law Ione Feliz said to WABC 7, "I don't understand how they let the store owners or employees or whoever is there let him come back out like that, when he's cut in the main artery."

NYPD Chief of Detectives Dermot Shea Tweeted, "Thank you for the many, many valuable tips. We are working 24/7 reviewing each and every tip submitted and making significant progress. It’s an expansive investigation with one salient objective: #JusticeForJunior."

Thank U all 4 the outpouring of tips & info regarding this tragedy. We are reviewing EACH & EVERY piece of info sent 2 us..Working around the clock 2 make sure those responsible are held accountable. Our thoughts & prayers are w the friends & family of Lesandro #JUSTICEFORJUNIOR

Rap star Cardi B had publicized a GoFundMe for the family (which has now reached $100,000) and also questioned the NYPD's response to Leandro's killing. His mother thanked Cardi B, who shared the video from Latinos Music and message of condolences to the family:

It hurts me every time I see a story like this in the news. I’m a father of four and couldn’t imagine losing any one of my own kids. The violence and hate needs to stop. There’s too much other stuff already going on in this world. #JusticeForJunior pic.twitter.com/OdMv9Vs1Uu

Grieving mother Leandra Feliz said she will wait for the police's information before believing the mistaken identity claim. She said, "They broke my heart- they killed my son, and they killed me at the same time."

#bronx
#Lesandro Guzman-Feliz
#murder
#trinitarios
Do you know the scoop? Comment below or Send us a Tip