Game Over for Cop & Robber 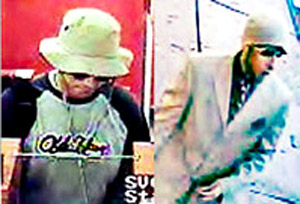 It's not unusual for police officers to make side money by moonlighting with second jobs. Christian Torres is a rookie cop, however, who took that practice to a whole new level--allegedly robbing banks when off duty.

On Thursday, Torres arrested in Pennsylvania less than a block from the bank he just robbed. Unaware the teller had tripped a silent alarm and that a police officer followed him, he showed his NYPD badge, thinking he was pulled over for making an illegal turn.

According to Police Commissioner Kelly, Torres admitted he actually robbed the same Sovereign Bank branch in the East Village twice. The first haul of $16,305 was a month before he entered the police academy. The second time, he was a police cadet and made off with more than $100,000. Surveillance footage (pictured above) showed Torres' various get-ups. 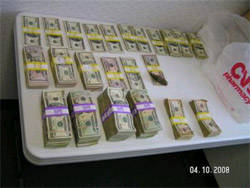 Commissioner Kelly said there was little to indicate Torres would be an off-hours bank robber, saying, "This has baffled everyone who thought they knew him. His police-cadet record was very positive. It's a shocking story." And as many are noting the low pay for police officers, Kelly added, "This was not done to put food on the table."

Torres appeared to have been on his bank-heist spree to pay for his upcoming wedding. He bought a 1.5 carat diamond engagement ring for his fiancée with some of the proceeds and paid cash for a Toyota Scion hours after his second holdup.

The 21-year-old, who earned a scholarship to the prestigious Rye Country Day School and graduated from the John Jay College of Criminal Justice with a 3.6 GPA before joining the force, is being held on $1 million bail in Pennsylvania. His landlord in Queens said, "He was dying to be a cop. All of a sudden, he became a cop and look what happened. Why? Why would he do that? It doesn't make sense."