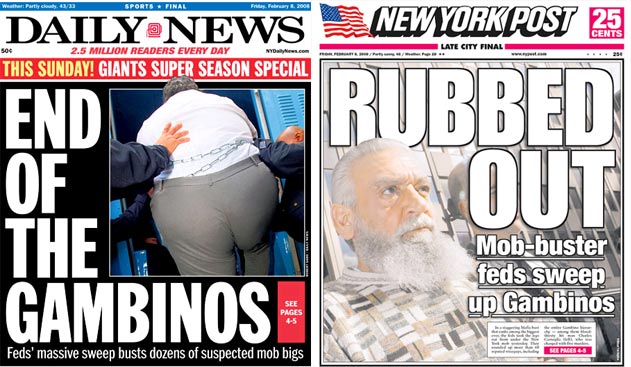 Sixty-two men associated with the Gambino, Genovese and Bonanno crime families were arrested yesterday in a federal, state and local coordinated sweep in the New York region. A number of Gambino-related arrests were also made in Italy, and authorities have described this as the biggest mob bust in decades. Brooklyn U.S. Attorney Benton Campbell said, "Our goal is and always has been simple: to dismantle the Gambino organized-crime family in a coordinated and consistent fashion."

The 170-page, 80-count indictment (PDF) alleges crimes including a 32-year-old murder of a Brooklyn court officer, attempted murder, racketeering, and extortion at the potential NASCAR site in Staten Island. (There was another Queens indictment against 26 Gambinos over sports-betting.) The FBI, NYPD, and district attorney's offices in Queens and Staten Island had been working on the case for five years. Police Commissioner Ray Kelly said, "This was a bad day for organized crime, its killers and its cash producers," but cautioned, "We can never say that organized crime is wiped out. They're very resilient....They're tenacious." Assistant FBI Director Mark Mershon emphasized, "It is simply wrong to suggest that La Cosa Nostra or LCN is no longer a threat to public safety or the economic vitality of New York City and the surrounding region."

One of the big arrests was of Gambino soldier Charles Carneglia (pictured, in the NY Post cover above). He was charged with the 1976 killing of court officer 25-year-old Albert Gelb. Gelb, who arrested Carneglia when he and his friends were harassing a waitress, was set to testify against Carneglia but was found shot days before his scheduled court appearance. The NY Times contacted Gelb's sister for a comment and she didn't realize someone had been charged:

[Emily Gelb] was speechless at first, then said she needed a moment and hung up.

Twenty minutes later, when she called back, she said the whole thing was utterly surreal.

“I’m shocked, obviously, after 32 years, but I’m very pleased that the wheels of justice are turning. The pain is still there,” she went on, her voice beginning to quake. “He was my only brother. It gets better, but it doesn’t go away.”