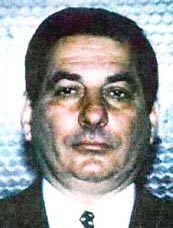 Alleged Gambino family consigliere Joseph "Jo Jo" (or "Miserable") Corozzo decided to represent himself in a racketeering trial. Corozzo, 66, told federal Judge Jack Weinstein yesterday, "I would like to represent myself."

His son, lawyer Joseph Corozzo Jr., can't represent his father (a potential government witness is a former client), so his father said, "I really don't want Legal Aid." The elder Corozzo was taken in during the February raid of dozens of Gambino crime family members.

Other reputed mobsters were present for the pre-trial hearing, where Weinstein began to schedule trials. A woman whose father was allegedly killed by Charles Carneglia appeared in court yesterday, only for Carneglia to tell her, "Wrong guy." The Daily News writes while it's not clear how Carneglia knew who she was but "inmates have access to newspapers, and The Daily News reported last month in a front page story that Colon planned to attend his next court appearance."

#Charles Carneglia
#gambino
#Joseph Corozzo
#la cosa nostra
#mafia
#mob
Do you know the scoop? Comment below or Send us a Tip