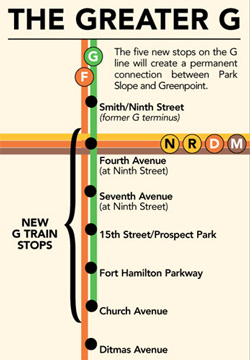 Riders hope that low grades for the G line will eventually lead to improvements, while plans are in place to make the G a more usable line. Despite being the two largest boroughs in New York City, there is only one train line dedicated to getting people from Brooklyn (2.5 million people) to Queens (2.3 million people). All other passages must make their way from one borough, through Manhattan (1.6 million people), and then on to the third. The only body of water the G line crosses, however, is the Newtown Creek, separating Kings and Queens Counties. The service is regularly judged abysmal, although paradoxically it gets good grades overall through quirks of the MTA's rating system.

The MTA has been distributing reader report cards recently, though, and allowing passengers themselves to assess what they thought of the lines that they ride. According to The New York Times, G riders expect the line to get a grade of F, and are even hoping for it. Supporters and detractors of the G line are hopeful that a poor grade on the rider survey will spur improvements to a line whose trains only consist of four cars, rather than the standard eight cars on other lines.

Currently the G line stops at Smith/9th Sts. in Brooklyn, stranding riders high in the air with a fine view of the Gowanus Canal until an F train comes along to carry them further into the borough. The Brooklyn Paper recently reported though that plans are in place to extend G-line service all the way to Kensington.

Originally, the MTA said the line would add stops at Fourth Avenue, Seventh Avenue, 15th Street, Fort Hamilton Parkway and Church Avenue only until the repair work to the viaduct was completed in 2012.

But now the agency says that the direct underground link between Greenpoint and Kensington — by way of Park Slope —will be permanent.

The whole project is estimated to cost $250 million and will include a complete refurbishment of the now-grimy viaduct that carries the elevated F line across 4th Ave. at 9th St. in Park Slope.