Brennan, a 31-year-old former attorney and Toronto transplant, has apologized for the promotional blunder, after initially saying she was just being "cheeky" when she decided to photograph a $12 cocktail in front of "bullet holes" in the wall at 637 Nostrand. She has also faced community backlash for saying she would serve the 40 ounce bottles of rosé in paper bags, prompting accusations of classism and racism.

On Saturday, incensed residents spoke about the impact of gentrification on their neighborhood, and accused Summerhill of glorifying violence, and for-profit cultural appropriation.

"People of color are not props or backdrops," said Toya Lillard, who is black, and a Crown Heights resident of over 20 years. "If you are new to this community you are duty bound to do some research. To be culturally literate. To know where you are. To know what came before you. It's not our job to inform you or educate you. It's yours."

Summerhill was open for business during the protest, windows flung open to the street. Forty Ounce Rosé bottles had been cleared away from the bar shelves. 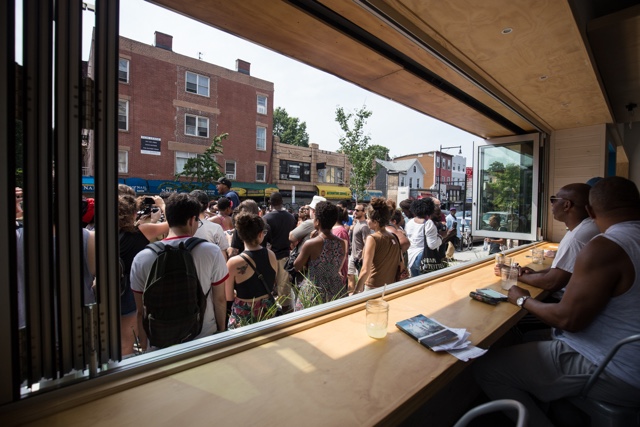 About a dozen patrons sat around the bar and at high tables, occasionally speaking with reporters, while Brennan herself mixed cocktails. She did not engage with the crowd outside, even as protesters started a loud chant of "Bye, Bye Becky," using slang for a generic white woman. Speaker after speaker climbed a step ladder outside and called for a boycott, while two publicists, one of whom described himself as "crisis management," took notes.

"I grew up here for 54 years," said neighbor Stephanie Simms, who is black. "I watched Colt 45 being bought. I have drank it in my years. Yes, it was a cheap drink and it was in a brown paper bag, but it destroyed lives. So why is it something that you want to monopolize on?"

"Glorifying violence is not the way to go," added another speaker, who did not provide his name. "I'm a resident of Crown Heights. I'm a black man. I'm offended that people are marketing our hurt, our pain, our struggle. Crown Heights is not on sale."

"I make people like this [bar owner] feel comfortable in this neighborhood, and I get that," said resident Fred Chong Rutherford, one of a minority of non-black speakers. "But all I know is one thing: it's very important to do the right thing." 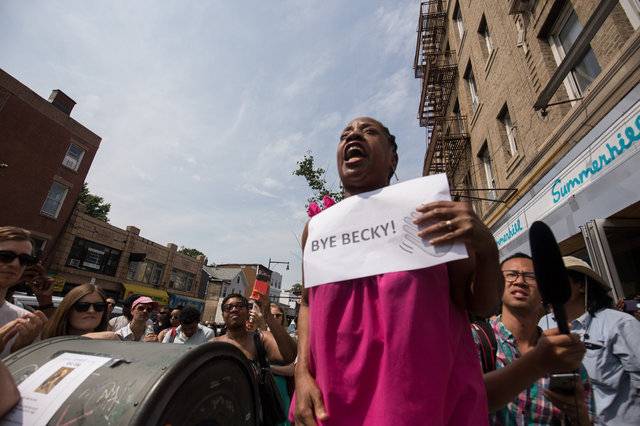 Organizers presented Brennan with a list of demands Saturday, including a public, spoken apology or press release; the removal of the "bullet hole" wall; and a commitment to attend meetings of the Crown Heights Tenant Union, a coalition of Crown Heights residents that has protested the proliferation of bars in the neighborhood and challenges landlords who harass tenants to hike rents. Brennan issued a statement to Gothamist last week, saying, "I truly never meant it in that way, but I recognize that it was insensitive." Her publicists passed out copies of a similar statement on Saturday. "I recognize that I have more work to do to continue healing relationships with my neighbors," it stated.

"If she really meant it she would be out here listening to what we have to say," challenged organizer Paola Ayala.

There were moments of tension Saturday, despite organizers' insistence that anyone could address the crowd regardless of their stance on the bar. Midway through the action, a man who identified himself as a Summerhill cook stood up to defend Brennan, but stepped down after protesters shouted over him for several minutes.

"People of color I want you to look around you," said the cook, who is black. He motioned to the diverse crowd, including many young white people. "It's the gentrifiers going off on a gentrifier."

"The 40s, the rosé, why are you tying that back into us?" he added. "That ain't my culture. I don't want gun violence tied back into my culture."

Protesters countered that 40 ounce malt liquor and gun violence are inextricably linked to longstanding racist stereotypes, and accused Brennan of crass exploitation. "Don't say, 'Don't tie something to our culture,'" said the demonstrator in the video below. "Half of that shit was pushed on us."

"I'm very aware of one word: Holocaust, right?" she added. "If someone made a wall like a gas chamber and served matzo ball soup, how would y'all feel? You wouldn't be protesting, that shit would be shut down!"

The comment drew criticism from Mordechai Lightstone, a vocal member of the Chabad-Lubavitch community in Crown Heights. Lightstone tweeted that the "casual anti-Semitism" was offensive, and solidified his hunch that Crown Height's large Jewish community was not accommodated at an event protesting symbols that are "an insult to our experience as well."

Throughout the action, a few locals sat in the bar's front window, sipping cold drinks and defending Brennan.

"It's the wrong cause," said Jamal Muhammad, part-owner of a nearby bodega, motioning at the protesters. "We had two shootings on [nearby] St. Marks last year, and none of those bougie people show up."

"I think it's hogwash," added Frank Morris, a commercial landlord on Nostrand Avenue and resident of Crown Heights since 1990.

"From what I've seen, she has young black kids here every day helping them with their homework, young black kids cleaning her windows, and black people coming in here and having a good time," Morris, who is black, added. "This whole thing is overblown."

Tracey Reid, one of Morris's commercial tenants, owns Lionheart National Herbs across the street from Summerhill. She pointed at Morris during her remarks Saturday, accusing him of being complicit in the neighborhood's rapid gentrification.

"For you to rent me a store for 18 years without heat and hot water and to sit here and say you are promoting a new local business is very distasteful," Reid said. "Because you never would have rented a Caucasian woman that store 18 years without water and heat."

Organizer Justine Stephens described Saturday's action as a success. Brennan's publicists took her information and plan to set up a meeting, she said.

"Our list of demands were pretty simple," Stephens added. "They are vague enough where it's—we'll work with you to help you. But at this point it's on her."

This story has been updated.

#Crown Heights
#gentrification
#Summerhill
#original
Do you know the scoop? Comment below or Send us a Tip