Furious Crown Heights Residents Confront 'Bullet Hole' Bar Owner: 'Our Only Demand Is For Her To Close'

Dozens of Crown Heights residents rallied Sunday afternoon outside Summerhill, a new self-described "boozy sandwich shop" on Nostrand Avenue, for the second protest in as many months against owner Becca Brennan's decision to advertise a cocktail in front of a "bullet hole-ridden wall" and Forty Ounce Rosé in a recent press release.

Brennan, a 31-year-old former attorney and Toronto transplant, apologized for the promotional blunder in July, after initially saying she was just being "cheeky" when she decided to photograph a $12 cocktail in front of what she said were "bullet holes" in the wall at 637 Nostrand. Brennan also faced community backlash for telling Gothamist that she planned to "go get paper bags" for the rosé. Some residents accused Summerhill of racism, glorifying violence to appeal to gentrifiers, and for-profit cultural appropriation.

While the rosé bottles are long gone from a rack above the bar, Brennan has not plastered over the pockmarked wall—one of the protesters' initial demands.

Sunday's heated demonstration was smaller than the first. Protesters directed their anger directly at Brennan, asking her when she plans to return to Canada, and chanting "Boycott Summerhill!" and "Bye, Bye Becky!" (slang for a generic white woman).

Brennan sat at an outdoor table with a crossword and drink, occasionally shouting back and forth with protesters across a line of roughly a dozen police officers.

"The pain that we had to go through: think about the pain," said 55-year-old Natherlene Bolden, a founding member of the Crown Heights Tenants Union and a resident of the neighborhood since 1978. "Think about the mothers crying. And then talk to the long-term residents who have experienced some flying bullets. Talk to us, Becca."

"I would love to. I said call me! Let's get coffee," Brennan responded.

Patrons declined to provide their names to Gothamist, but said Brennan is "nice" and that the protesters should leave her alone.

As the back-and-forth continued, Brennan said that she had already apologized. When 25-year-old organizer Justine Stephens accused Brennan of interrupting a woman of color who was reprimanding Brennan for exploiting "one of the worst parts of the legacy of this neighborhood," Brennan went inside, where a handful of patrons sat. "You are so out of your fucking element," Brennan called out to Stephens.

A small number of protesters called Brennan a "white supremacist" Sunday, according to multiple witnesses. Video footage includes at least one man's voice.

"I find that when white people participate in protests about black issues, they tend to over compensate for the fact that they are white," said demonstrator Christa Aiken, 28, who heard "one person saying it, a white man, very loudly and boldly."

"Is she a clueless woman comfortably steeped in her white privilege? Absolutely," Aiken added. "Is she a bad person? After speaking with her myself, I can comfortably say yes. She's terrible. But I'm not going to risk changing the subject and making this a 'Charlottesville response in New York' by throwing that label on her. We've been fighting this issue before Charlottesville and we will continue after."

Brennan did not respond to multiple requests for comment on the action or the "white supremacist" insult. Shea Communications, which represented Brennan in the immediate aftermath of the first media reports on the bar, confirmed Monday that the firm is no longer working with her.

Racial insults were directed at protesters as well on Sunday. Stephens, who is black, received threatening messages on Facebook, which she shared with Gothamist. One Facebook user named Ashely George wrote, "Here you are protesting about black lives matter... you claim your [sic] so pro black but have mad white people protesting with you."

Stephens also said a Summerhill worker, who is black, insulted her relaxed hair. "Please, keep bullying me," she wrote on Instagram. "Keep showing your true colors."

Some said they were frustrated with what they saw as slippage between Brennan's formal apology statement last month, in which she said, "I recognize that I have more work to do," and her words and actions on Sunday.

"She didn't have an attitude of contrition, or respect," said resident Fred Chong Rutherford. "She didn't seem interested in healing relationships with her neighbors. What has she actually done in the last month? Did she even make a symbolic gesture like patch her wall? No." 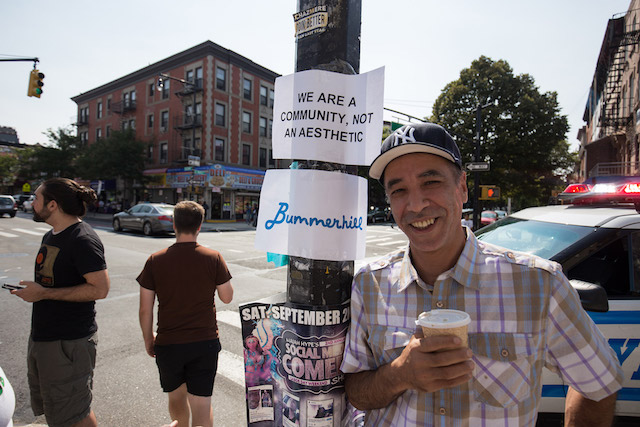 In July, organizers presented Brennan with a list of demands, including a public, spoken apology or press release; the removal of the "bullet hole" wall; and a commitment to attend meetings of the Crown Heights Tenant Union, a coalition of Crown Heights residents that has protested the proliferation of bars in the neighborhood and challenges landlords who harass tenants to hike rents.

Now, "Our only demand is for her to close," organizers Stephens, Jon Villaran and Paola Ayala stated Monday.

"Brennan hasn't done anything, listened, or reached out, except through her PR firm," they added. "She's continued to make light of the situation through her Instagram posts."

Geoffrey Davis, 43rd Assembly District leader and an anti-violence advocate, attended yesterday's action at Brennan's request, to "come down and try to resolve." He accused protesters of "destroying the conversation" with chants, adding, "I'm going to try to get with the leadership of the protesters and have them do a private dialogue with Becca."

Organizers called the action an "absolute success," noting attendance from local advocacy groups including Equality for Flatbush, Movement to Protect the People, and Save Our Streets Crown Heights.

Roxanne Brown, 55, lives in an apartment above Summerhill. A Crown Heights resident of 38 years, she spoke to Brennan during Sunday's action.

"Yesterday they were so mean to her I just kind of felt bad for her," Brown told Gothamist. "They called her everything under the sun: white supremacist, she 'makes white trash look bad.' I think she's very nervous. She says she has to be strong and this will go away. I doubt that. They have it in for her."

Brown added that she thinks Brennan is being stubborn, and could "take it down and stop all the confusion and appease the people."

"I don't know how long she is going to last," Brown added. "At first when she opened there was a nice crowd. Now, day to day I would say she has four or five customers. I feel bad for her, I don't see her lasting very long, but I think she's bringing it on herself."