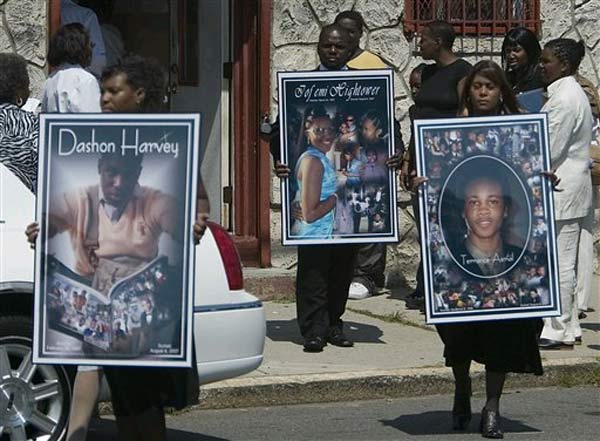 Grieving families buried the three victims of last weekend's execution-style murders in Newark. Authorities also named a fourth suspect in the crimes: Rodolfo Godinez, a 24-year-old who has a record of robbery, assault, and weapons arrests.

Separate funerals were held for 20-year-old Iofemi Hightower, 20-year-old Dashon Harvey, and 18-year-old Terrance Aerial. Newark Mayor Cory Booker attended all funerals, and when he spoke at Aerial's funeral, the NY Times noted that his words were a "mix of anger, praise and a personal appeal for forgiveness."

In the days before the killings, Mr. Booker had been criticized by many who said he was disconnected from residents of his adopted city, and a video had surfaced in which Mr. Booker described a colorful Newark activist using words that, while intended as affectionate, angered the activist’s family and even the mayor’s supporters.

“I want to repent to this church,” Mr. Booker said at Mr. Aeriel’s funeral. “In the days leading into Saturday, I was saying things that hurt this city. But I broke down. I was broken down, but in the pit of my despair I heard the Lord speak.”

As the crowd rose and cheered, he added: “How dare I or any other Newarker crumble to the ground? How dare we give in to fear? How dare people turn on their brothers and attack them, blame them?”

Booker also credited Aerial's 19-year-old sister Natasha, who survived being shot in the head, for helping the police identify of the suspects, Jose Lachira Carranza. Carranza, a 28-year-old Peruvian immigrant, and two 15-year-olds are currently in custody, and all are either arraigned or waiting to be arraigned on murder, attempted murder, and robbery charges.

It's believed that the suspects used at least one gun as well as a machete in the attack, which authorities think was initially motivated by robbery. The Star-Ledger reports that Godinez may have been in the country illegally. He was supposed to be deported in 1993, but it's unclear whether he actually left the country.

The Star-Ledger also has a story about how residents in a housing complex were familiar with Carranza and his friends. Carranza and his group would smoke marijuana and drink beer in the hallways of the Ivy Hil Park apartments, called an "affordable haven" "where serious trouble is still rare enough that it stands out," as well as at the Mount Vernon School, where the shootings took place. The men had recently started to rob passers-by for cash, and residents believe they had ties to MS-13, a Central American gang. 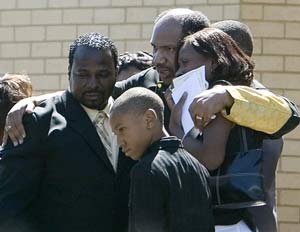 Governor Corzine, who like Booker attended all funeral, said at Harvey's funeral, "these children deserved better. They were representatives of all the hope we carry and we must use their deaths as motive to reject the violence that is so wrong... I will do everything as governor, as a human being, to stand for a change so no other children have to go through this again."

And Renee Tucker, mother of Terrance and Natasha Aerial, told mourners, "Love your children. Hug your children. Tell them you feel them and you understand them. Because one day, they may not be there. And you will never have that chance again."