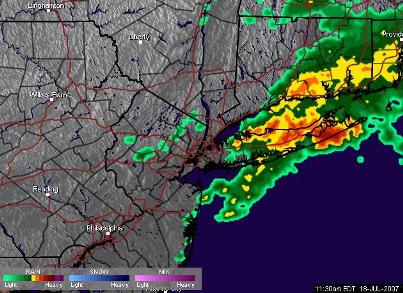 Intense rain was the rule across the metro area this morning. Nearly and inch fell on Central Park in less than an hour. Almost two inches fell on LaGuardia. The intense rain from the early morning thunderstorm led to widespread urban and small stream flooding this morning, causing an array of power outages, airport and mass transit delays and traffic backups. While the rain has diminished in the city, eastern Long Island and the southern New England coast is getting drenched.

The chance of rain and thunderstorms should increase again later this afternoon as the cold front that brought us clear skies and, umm, warm weather yesterday backs up toward New England. Temperatures should be suppressed by the clouds and rain today –the high will only reach 80 degrees.

Tomorrow is looking yucky. It will be warmer and more humid as the moist air mass behind the backward moving cold front filters in. The timing is uncertain, but the potential exists for gobs of rain to fall Thursday afternoon through Friday morning. Forecast uncertainty only grows through the weekend. Saturday looks like it will be mostly pleasant, with temperatures on the cool side, but it is not yet clear whether Sunday will have sunny or stormy skies.