The fugitive pedophile shot dead by U.S. Marshals in a West Village smoke shop on Monday had been hiding in plain sight for at least a year, and was relatively well known to others in the neighborhood. Going by the name John Smith, alleged pedophile Charles Mozdir found work in a tattoo parlor before landing at Smoking Culture on West 4th Street, where he was even interviewed for a NY Post story on pot vaporizers last year, telling the tabloid, "I get a lot of upper-class guys in here. They’ve got money, they’re captains of industry."

Mozdir himself was no stranger to "upper-class" guys; the Times reports that he "attended high school in Coronado, a wealthy enclave on a narrow peninsula across from San Diego." According to the Times, Mozdir appears to have been sent straight from pedophilia Central Casting:

Often alone, he would coax others to hang out with him by offering to buy food, said Brian Belmonte, a 34-year-old construction worker who knew him. More darkly, he would show off clips of animal pornography that he found funny, Mr. Belmonte said. “He was a strange, strange guy,” he said.

Similar imagery, along with pornographic pictures of children, turned up on Mr. Mozdir’s cellphone years later, after a boy accused Mr. Mozdir of molesting him, the authorities said.

That first accusation never led to any criminal charges, but in 2012 Mozdir was arrested on allegations that he molested a friend's 7-year-old son. Mozdir had previously been roommates with the boy's mother, and she trusted him. "He was like a godfather to my kids,” she told the Times. “You think you know someone, especially living with him and everything." Lea Corbin, a spokeswoman for the Coronado Police Department, told the Times that investigators found photos on Mozdir's cellphone that "were pretty unimaginable." 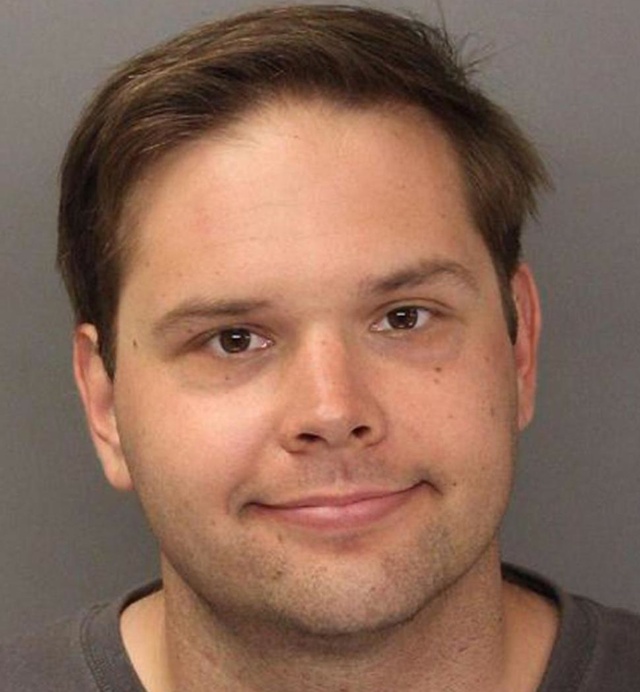 After posting $250,000 bail with the help of his family, Mozdir dropped off the grid with his black lab, Lucky, growing a beard and resurfacing in the Village as John Smith. “He gave me a fake name, a fake identity,” his roommate tells the Post. "He was a little unshaven, but I wasn’t renting out the apartment based on appearance.”

One Village drug slinger who knew "Smith" tells the Times he "would often see Mr. Mozdir, sometimes walking alone, carrying a laptop bag, other times in the company of cross-dressers," adding that "a lot of white guys say their name is John around nighttime. He was the normal type of weird to be here."

After Mozdir and his dog were featured on an episode of CNN's "The Hunt," investigators received multiple tips pointing to NYC and the West Village. On Monday, Detective Mario Muniz entered Smoking Culture posing as a potential customer and made Mozdir. He left the store, put on the bulletproof vest that saved his life, and returned to make the arrest with the two U.S. Marshals. Mozdir reportedly opened fire with a .32 as Detective Muniz tried to cuff him, and wounded all three officers. But the Marshals successfully shot him dead.

The Marshals shot by Mozdir were released from the hospital yesterday; Detective Muiz, who was more seriously wounded, is expected to be released this week. Lucky, the labrador, is now being cared for by Mozdir's former roommate. "Well, he’s mine now,” the roommate tells the Post. "Fortunately, I like the dog. He’s a good dog."