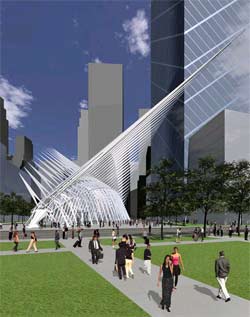 The Federal Trade Administration's head emphasized the alarm over the cost of building the World Trade Center transit hub. James Simpson said, "if the project is as advertised today, it's in the $3 billion." He added that the FTA is "holding the Port Authority's feet to the fire" to make sure the FTA's $1.9 billion grant for the project is spent wisely.

Last week, the NY Times revealed the Port Authority was trying to cut costs, while not sacrificing Santiago Calatravo's soaring design. The project was initially estimated at $2.2 billion, but, per an FTA risk assessment study, the NY Times reported "here was less than a 5 percent probability that the $2.221 billion budget would be met and that there was a 10 percent probability that the costs would exceed $2.991 billion."

Port Authority spokesman Steve Sigmund told the AP, "We want to protect as much of Calatrava's design as possible. We're certainly committed to the real iconic elements of it." (It's unclear if the departure of PA executive director Anthony Shorris will further muddle the rebuilding.) See a gallery of renderings of the proposed WTC transit hub here. And Port Authority chairman Anthony Coscia sent a withering memo to his staff, saying the WTC memorial cannot be delayed any longer "because we recognized the critical need to accelerate redevelopment of the WTC site."