"I never had this problem in all my years of voting, and I'm a consistent voter."

It was the afternoon of Primary Day, and Thomas Williams* was in a carpeted back hallway of the Brooklyn Board of Elections Office holding a court order to show poll workers later in the evening, telling them he should be allowed to vote. Moments earlier, Williams had sat in a plastic chair in a stuffy, carpeted office, across a steel desk from Brooklyn Supreme Court Judge Wavny Toussaint, surrounded by court and Elections personnel, explaining his situation. Sometime this year, the agency sent a piece of mail to Williams to confirm his Flatbush address, but left off his apartment number. When the postal service returned the notice as undeliverable, someone at the Board changed Williams's registration to inactive, meaning his name would not appear on the list at his poll site.

Toussaint considered these facts for about five minutes, then agreed that he should be allowed to vote. Williams returned to work, behind a desk on the same floor.

Williams is a seasonal Board of Elections worker himself, but not even his knowledge of the system could protect him from the irregularities that affected so many New York voters ahead of this year's primary, particularly in Kings County.

126,000 Brooklyn Democrats were removed from the active voter rolls since last November, 44,000, like Williams, rendered inactive, 70,000 more purged entirely, and 12,000 because voters were listed as having left the borough. In the back hallway and lobby of the city Elections Board's Downtown Brooklyn office, 15-20 would-be voters at a time waited 30 minutes to an hour and a half for their cases to be heard.

"It's nonstop. It might be worse than '08," one worker said to another during a down moment between hearings.

Raymi Ramseur, a secretary to the judge, said that many registrations at issue had changed on one day in January. "1/13 was the day they just..." she made a clearing-the-table motion with her hand.

City BOE director Michael Ryan explained to WNYC that the Brooklyn office "was a little behind with their list maintenance tasks," six months to a year behind other offices, and had updated a backlog of entries since November's election, when "work [stopped] getting done."

Many of the problems raised by voters trying to get a judge's sign-off this afternoon did not, from records pulled by Board workers, get satisfactory explanations. However, Toussaint and Judge Genine Edwards, who pulled a seven-hour shift before her, often erred on the side of the voters who took the time to make their case. 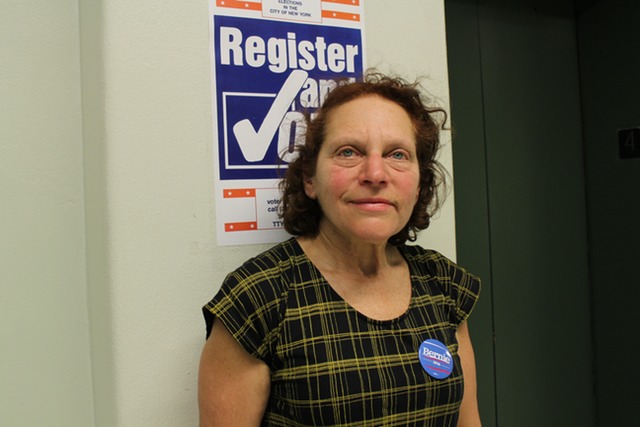 Anne Bassen, who inadvertently un-enrolled from the Democratic Party when filling out a DMV form in 2014. A judge denied her. (Nathan Tempey/Gothamist)

"The last time it was this busy was November of '08, Obama vs. McCain," said Averell Golub, a clerk for Edwards holding a sheaf of voter petitions as he left for the day. "[Like back then] you've got a lot of new voters who are not familiar with the rules complaining. A lot of them are Bernie Sanders people, or, what do I know, they're registered Democrats, and we had one Trump individual."

Golub, like state and city election officials before him, chalked up the mass confusion and observations of overwhelming dysfunction to new voter ignorance of New York's closed primary system and early party-change deadline. He said when Judge Edwards denied people's claims, court staffers instructed them how to file an affidavit ballot, to be considered and possibly counted following the election. He acknowledged that "one or two" cases he'd seen were attributable to clerical errors by the BOE. At the end of the day, he said, the judge went easy.

"More [requests] were approved than not," he said.

Of eight hearings we observed, six went in the favor of the voters. The two denied were a couple from Sheepshead Bay for whom English was not a first language, who evidently didn't understand that their membership in the Independence Party barred them from voting in the Republican primary.

"If I could do it, I would let everyone who wanted to vote today vote," Toussaint told one member of this couple. "But the law's the law. My hands are tied." 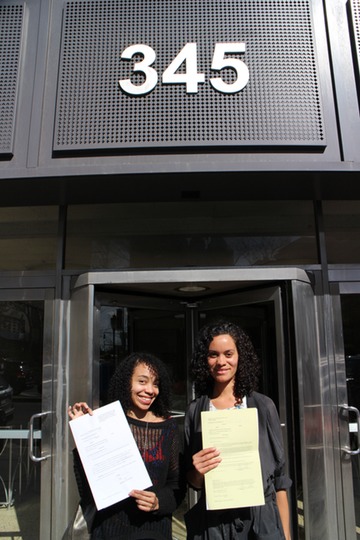 Aurora Thornhill, left, and her sister Angelica hold court orders allowing them to vote in the primary outside the Brooklyn Board of Elections office. (Nathan Tempey/Gothamist)

Then there were voters like Aurora and Angelica Thornhill, Sanders supporters whose registrations were somehow or other mangled. Aurora, a science communications consultant, was told at her polling place in Bedford-Stuyvesant that her name was not on the list. Distrustful of the affidavit ballot counting process, she found Gothamist's guide on primary voting through friends, and opted to get a court order. At the BOE office, she learned that though she is listed somewhere in the Board's system as a Democrat, a 2013 party change never went through to another, crucial part, and a piece of mail sent to the wrong apartment rendered her inactive.

"If they don't fix this this time around, there's going to be serious outrage," Aurora Thornhill said, noting that many who aren't freelancers or retired cannot spare the time to appear before a judge on Primary Day. "If they don't open up the primary, they should at least make the instructions completely clear."

Her sister, Angelica, said she voted in the November 2012 election as a Democrat, but when she looked her status up online in March, perturbed by primary problems in Arizona, she was listed as not affiliated with a party. Though Angelica says she filed an absentee ballot in that election, which would have generated a request in the BOE's system, the only form they could find attached to her file was a single, cropped page of a form of unclear provenance, with a box checked saying "I do not wish to register in a party." For others, this box on DMV license renewal forms seems to have caused them to inadvertently remove themselves from the ranks of their chosen party, but Thornhill said she doesn't believe she filled out anything like that.

She said she called the Brooklyn BOE last month and got assurances that she was a registered Dem, but she was denied at her Crown Heights polling place. Judge Toussaint seemed to nearly end Angelica's hour and a half at the BOE office with a second denial.

"I'm sorry, but given the material that we have, it doesn't look as if," Judge Toussaint began.

"We do have you listed under 'Democrat.'"

"I'm going to give you the benefit of a doubt and grant your request," she said. "What we're trying to do here is encourage people to vote."

*Earlier in the afternoon, Williams and BOE administrative assistant Angela Petit had me removed from the premises by a police officer, saying that a letter to Gothamist from BOE director Michael Ryan stating that our reporters should be allowed at election sites was no good unless it came to them directly from their bosses. They allowed me back in 20 minutes later, after I reached someone above their bosses.