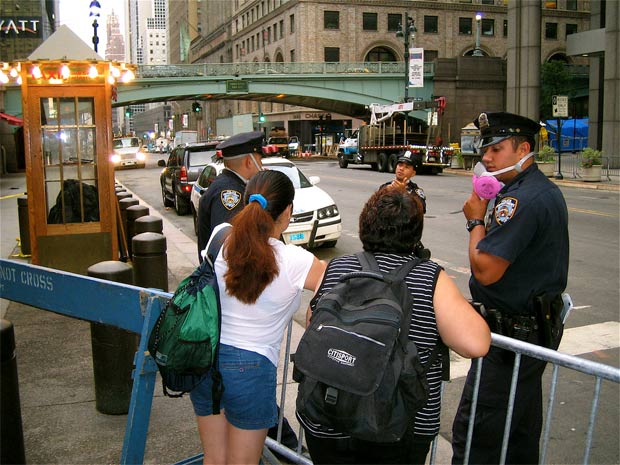 The city continued clean-up at the site of Wednesday's Midtown steam pipe explosion at East 41st and Lexington Avenue. Vanderbilt Avenue has been reopened, and Third Avenue was scheduled to be reopened today. Clean up of 42nd Street between Third and Park should be done by Monday, while clean up of Lexington between 42nd and 43rd should be done by the end of the weekend. Here's what the city said about the asbestos samples:

The Department of Environmental Protection tests of 12 air samples showed none of them testing positive for asbestos. The steam, humidity, and rainfall probably helped the situation because it prevented asbestos particles from becoming airborne.

In addition, DEP conducted tests on 71 bulk samples of debris and dust taken from the surrounding area and we’ve gotten results back on 56 out of those 71 so far. Of the 56, 14 tested positive for asbestos and the rest did not. Out of the 14, 12 really were just trace amounts. DEP will continue testing until clean up work has been completed.

Con Ed is accepting contaminated clothing at a customer service van at Vanderbilt and 42nd. The Department of Health will be ordering building owners in the area to hire inspectors to check HVAC systems and any exposed environments (the building owners should contact 311 for more info). People are still wary of the possibility of contaminated air, especially since city workers, NYPD, FDNY, and DEP employees, not to mention Con Ed workers, are wearing air masks, but Dr. Michael Thun of the American Cancer Society told CityRoom that these workers are at the site much longer than people simply passing by, hence the need for masks.

The NY Times reports that Con Ed did repair a steam leak at the site of the explosion, but it's unclear if there's a connection between the repair and the explosion. Of course, this has made residents, workers, and politicians even more cynical of Con Ed's work. Assembly Michael Gianaris said, "I don't know how many of these incidents that we need to go through before we realize that Con Edison as a company is in need of dramatic reform." 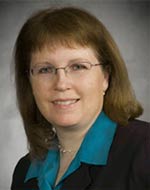 And now there are more details about some of the victims of the explosion. The one fatality was Lois Baumerich, who oversaw Pfizer's affirmative action and equal opportunity programs; Pfizer's office is at 235 East 42nd, and she was heading home. A 51-year-old NJ resident, Baumerich suffered a heart attack after the explosion. Her brother-in-law John O'Hara said that she had taken care of her parents until they died and spent months with a brother when he was ill, "She was very committed to family. When the family needed support, she was one of the most generous people I ever knew. If you needed anything, she'd give it to you."

One of the most critically injured victims is Gregory McCullough. A 23-year-old who studies at John Jay College at night and regularly attends church and karate classes on top of being a full-time truck driver, McCullough had been stuck in Midtown traffic. He had apparently missed a light and was waiting near the intersection of 41st and Lexington Avenue when the pipe exploded. Two bus drivers described what they saw; from the Daily News: 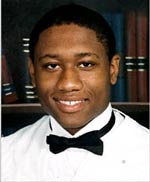 On the M103, driver Randall Rocha, 48, couldn't believe what he was seeing.

"The bus lifted a bit and the tow truck started to come up, and I thought he was gonna flip up and land on my lap," he said.

"I thought, 'Is this gonna keep coming and take off my head?' Then he just disappears and all you saw was this gush of smoke and steam."

McCullough was able to get out of his truck, but the steam burned 80% of his body. His body has swollen to about twice its size and doctors at NY-Presbyterian Hospital Weill Cornell put him in a medically induced coma. McCullough's passenger, Judith Bailey, was also rescued from the truck; she is in serious condition, with burns to 30% of her body.

The NY Times spoke with his aunt, Felicia McCullough, who said, "My nephew is clinging to life right now. I don’t know if he’s going to recover. I don’t know if he’ll have use of his limbs.” She also said, "Last year with Con Ed, people lost businesses and food. This year, people are losing their lives.”

McCullough's boss at One Stop Shell Towing, Tom Mule, told the Post that McCullough is a "great kid" and that "The bomb squad called us. They thought it was a bomb at first and they didn't know what happened. Twenty minutes later, the Fire Department called and they said it was a steam pipe." McCullogh's former boss, Lee Strum at Ridge Towing, was very upset; McCullough left Ridge because he wanted a day shift, so he could continue studying at John Jay at night, "Monday morning, I left a message on his cellphone. He didn't get back to me. He definitely wouldn't have been there if he had been working with us."

Photograph near Grand Central taken by JolieNY on Flickr