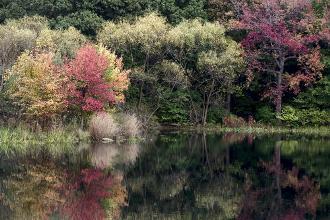 The dominant weather maker today is a high pressure system that covers much of the eastern half of the country. The big air mass is cool and dry. A clue as to how cool can be found in the dew point temperature. As the center of the high has moved east our dew point, the temperature to which the air must cool for dew to form, has dropped to 25 degrees. Below freezing that's a frost point, not a dew point. That's right, we might see the first frost of the season tonight as temperatures will fall to the lower- to mid-30s across the city.

The cool weather is expected to continue for the rest of the week. Fall is really here! Highs today, tomorrow and Friday will be around 50 degrees. Tomorrow should be mostly sunny, but clouds will build on Friday. The clouds will be from a weak, but quick moving low pressure system known as an Alberta Clipper.

More interesting is what could happen after the clipper moves offshore. The combination of cold air behind the storm, a warm ocean, and an upper level disturbance may be enough to produce rain, and perhaps another type of precipitation that is too scary to mention in a forecast, Friday night into Saturday morning. It is not too late to mention that last week was Winter Weather Awareness week. The Weather Service projects a high of only 38 on Saturday, while the Weather Channel is going nearly ten degrees warmer.

#alberta clipper
#As
#flickr
#frost
#joe schumacher
#news
#photos
#rain
#the city
#The Weather Service
#weather
#weather channel
#weather service
Do you know the scoop? Comment below or Send us a Tip