Frond Friends in the City 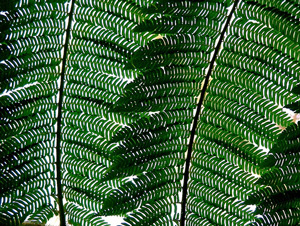 The American Fern Society is profiled in The New Yorker this week, as the piece's writer describes the outing of a number of people fascinated by one of the oldest forms of life still proliferating in New York City. Ferns could be described as biological pioneers. The plants' spores float to inhospitable locales and flourish, creating biological and envrionmental conditions for larger plants to grow. Ferns are the bellwethers of biological gentrification. An outing with the AFS along the Park Ave. viaduct sounds interesting.

One tends to think of ferns as delicate and moisture-loving, and many of them are. But others are among the toughest plants on the planet. Ferns will invariably be the first things to sprout, say, on a new lava flow. The planet’s atmosphere is full of fern spores. Woodsia obtusa, the basic fern on the Park Avenue embankment, has sixty-four spores within each sporangium, and thousands of sporangia on the underside of the fronds of every plant, so each plant is good for a million spores, perhaps more. Let one of these land on a suitable place, and you see why ferns are the great opportunists of the plant world. Indeed, in the fossil record, there is something called the “fern spike,” which shows how, after most of the world’s plants and land animals were killed in the great extinction of the late Cretaceous era, life came bursting back in the form of ferns.

Although the group's hunt for ferns ended abruptly, we imagine that the plants will continue to be the planet's hearty biological real estate developers in upcoming millenia.