From NYPD Blue to Jailhouse Orange 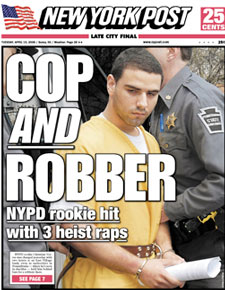 NYPD rookie Christian Torres has been charged in robbing an East Village Sovereign Bank branch twice. The law enforcement officer who held a second "job" as a felonious stickup man was initially arrested after robbing a Pennsylvania bank of $113,000.

Torres robbed the New York bank a month before he entered the police academy and then again while he was a police officer; police found the clothes he wore during those robberies in his Queens apartment. While some may argue that NYPD recruits are underpaid, Torres bought a new car and a 1.5-carat diamond ring for his fiancée.

His two East Village jobs netted him $118,000, and the reason Torres managed to steal so much money (many robberies are limited to four-figure takes) is that he wasn't averse to threatening extreme violence. He showed a gun to tellers, passed notes threatening to kill people if his demands weren't met, and, in Pennsylvania, he forced a teller into the bank's vault at gunpoint.

The Feds are leading the prosecution of Torres in the New York City robberies and are working with Pennsylvania authorities, who will get first dibs at convicting the crooked cop. Proving that there's no honor among thieves, one of Torres' Queens neighbors told the New York Post last week that if he knew the 21-year-old was stashing that much money in his house, he would've "robbed his ass."